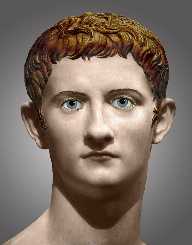 The first Roman Emperor Augustus was born in 63 BC. His mother was Atia Balba Caesonia, and biological father was Gaius Octavius. Julius Caesar was his adoptive father and a maternal great-uncle.

When Augustus was four years old, his maternal great-uncle Julius Caesar adopted him. The reason for the adoption was that after the civil war in 46 BC, Caesar needed an heir. Augustus was Caesar’s great-nephew.

After Caesar was assassinated in 44 BC, Octavius was named in his will as his heir and adopted a son.

Octavius formed the Second Triumvirate with Marcus Lepidus and Mark Antony which was approved by the Senate (43 BC - 36 BC). After their victory at the Battle of Philippi, they divided the Roman Republic between the three of them and ruled as military dictators. In 42 BC Octavian and Antony defeated the Republicans led by Brutus and Cassius at the Battle of Philippi in Greece. After that, Antony ruled Egypt and Augustus retained Rome.

When Augustus learned of Mark Anthony’s relationship with Cleopatra, he became concerned that Cleopatra was using Mark Anthony for her political ends. Mark Anthony subsequently became a figure of ridicule and contempt in Rome. His alliance with Augustus broke down.

In 36 BC Octavian strips Lepidus of power but allows him to remain Pontifex Maximus (the chief priest).

Fearing that Mark Antony and Cleopatra would attack Rome, Augustus attacked. The Battle of Actium (32 BC - 31 BC) destroyed three-quarters of Egypt’s fleet. Cleopatra and Marc Antony both committed suicide, and the Roman province of Alexandria was won back.

Augustus restored the Republic with the Senate, Executive Magistrates and Legislative Assemblies holding power but he still held the overriding powers of a military dictator. Augustus ruled Rome and the provinces. Under the terms of the constitution known as the Principate, he was known as the Princeps Civitatis.

He also restored temples and traditional values including sacrificing animals to the gods. He was appointed Pontifex Maximus (the chief priest of Rome) and Head of the Collegium Pontificum in 12 AD after Lepidus died.

From 27 BC he has created Imperator Caesar Divi Filius Augustus. He then set up the Praetorian Guard. In 19 BC, the Arch of Augustus was constructed in Rome, and the same year the Senate gave Augustus supreme powers.In 13 BC he founded the Cohortes Urbanae to help keep law and order.

A statue of Augustus as Pontifex was sculpted in 10 BC and in 9 BC the Arc Pacis was finished. In 6 BC Augustus began the aerarium military to fund a professional army from taxes. The same year he instigated a permanent firefighting team known as the Vigiles.

During his reign, there was a forty year period of peace and prosperity. He had ended many years of civil war and expanded the empire into a vast area. People prospered and traded under Rome’s authority across large areas which included Europe, North Africa, and the Middle East.

The last years of his life were marked by plotting and crises as he aged and appeared weaker, but he held on to power before dying in 14 AD. After his death, the Senate declared him a god.

Augustus was married three times. His first wife was Clodia Pulchra, and they married in 42 BC and divorced in 40 BC. His second marriage was to Scribonia in 40 BC whom he divorced in 38 BC. He then married his pregnant mistress Livia Drusilla in 37 BC, and they remained married until his death in AD 14.

He banished his daughter Julia because of public promiscuity. She was his only biological child, born to his second wife, Scribonia.

Augustus died on the 19 August 14 AD. His heir was his stepson Tiberius.

Born Gaius Octavius, Augustus had some name changes. Historias refer to him Octavius from birth until his adoption 44 BC. Post-adoption, when his name was changed to Gaius Julius Caesar Octavanius, they use Octavian for the period 44 BC - 27 BC. And Augustus for the period after he was declared Imperator Caesar Divi Filius Augustus 27 BC to AD 14.