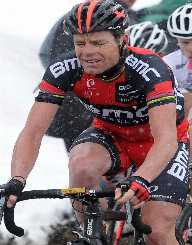 Cyclist Cadel Evans was born on the 14 February 1977 in Katherine, Northern Territory, Australia. Evan’s father Paul was council foreman and his mother Helen worked in finance. Evan’s parents separated when he was nine, and he left the Northern Territory with his mother. Initially, they lived in Armidale NSW, then later on in Melbourne. Around this time, his mountain bike riding skills won him a scholarship to attend the Australian Institute of Sport in Burton, ACT.

After leaving the Northern Territory, Cadel Evans enrolled at the Newling Public School in Armidale NSW, then later studied at the Eltham High School in Melbourne, Victoria.

In 1995, Cadel Evans after was accepted into the Australian Institute of Sport’s mountain bike programme. He excelled and quickly started winning medals. His first medal was winning bronze at the 1995 Junior World Mountain Bike Championship. Then, the same year, Cadel Evans won another bronze at the Junior World Road Time Trial Championship. In 1998 and 1999, he won the cross-country event in the Mountain Bike World Cup.

Cadel Evans had a decisive win in 2006, the Tour de Romandie. In an exciting finish, he beat Alejandro Valverde and Alberto Contador in the closing stages of the race. The following year, he did well in the Tour de France (2007) coming in second behind his Spanish rival, Contador. Evan’s came second in the 2008 Tour de France. The 2008 winner was Carlos Sastre of Spain. Evans also participated in the 245 km road race at the Beijing Olympics that year. He finished 15th behind Samuel Sanchez.

In 2015, Evans rode in the inaugural Cadel Evan Great Ocean Road Race in Victoria Australia. He finished fifth, announcing his retirement from cycling after the race.

In May 2015, Cadel Evans announced that after ten years together, his marriage to Italian musician Chiara Passerini was over. They have a son Robel, who was adopted from Ethiopia by the couple. Evans stated that the reason for the breakup was that his demanding career had put too much strain on their marriage. In 2015, the Courier Mail in Australia reported that Evans had formed a new relationship with Italian skier Stefanie Zandonella.

The Cadel Evans Great Ocean Road Race in the state of Victoria, Australia is named after Evans. The iconic road itself is a significant tourist attraction in Australia. It hugs the coastline, was built by Australians during the depression years; and is considered one of the most beautiful coastal drives in the world. Evans spends half his time in residence at Barwon Heads which is on the Great Ocean Road. He also has a home in Switzerland.

Since retirement Cadel Evans has got involved on the business side of cycling, working for BMC, the bike manufacturer, and retailer.