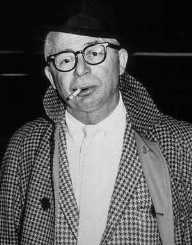 Samuel “Billy” Wilder was an Austrian-American filmmaker and journalist. Born on June 22, 1906¸ he was the first filmmaker to win a trio at the Academy Award for the best screenwriter, producer, director with a single film, The Apartment, in1960. His career spanned over five decades and considered one of the astute filmmakers in the golden age of Hollywood. Billy Wilder started his career as a screenwriter in Berlin in the late 1920s and made a directorial debut in 1934 with the film MauvaiseGraine while in Paris.

Moving to Hollywood in 1933, Billy Wilder cemented his credentials as result oriented director with the film adaptation of James M. Cain’s Double Indemnity in 1944. The film earned him Best Director at the Academy Awards. He followed it with The Lost Weekend, 1945, which won him the Best Screenplay Academy Award. He was the co-writer and director of Sunset Boulevard, 1950 and Stalag 17 in 1953. His other works include The Seven Year Itch, 1955, and Some Like it Hot, 1959 among several others.

“Billy” Wilder was born on June 22, 1906, in Sucha Bestkidzka, Australia to Eugenia (née Dittler)Siedlisker and Max Wilder. He was born into a Jewish family and had an elder brother William Lee Wilder. His mother nicknamed him Billy. The family later relocated to Vienna where he started his education. He then enrolled at the University of Vienna but dropped out after his first year to work as a journalist.

Dropping out of school, “Billy” Wilder worked as a stinger reporting on sports for a Vienna newspaper. He was later hired by a newspaper in Berlin in 1926 to report on the crime beat. This would lead to his career as a screenwriter.

“Billy” Wilder earned his first screenwriting credit in the German silent drama film Menschen am Sonntag (People on Sunday),1930 directed by Robert Siodmak, Fred Zinnemann, and Edgar Ulmer. He also wrote the screenplay of the film adaptation of Erich Kaster’s novel Emil and the Detectives in 1931.“Billy” Wilder left Germany for Paris, during the rise of Adolf Hitler and the Nazis since he was a Jew. It was during his stay in Paris that he made a directorial debut working alongside Alexander Esway for the film MauvaiseGraine in 1934. After this film, he left for the United States, settling in Hollywood.

“Billy” Wilder was able to escape the atrocities of the Nazis, but his family was not spared during the Holocaust. His mother, stepfather, and grandmother were victims of the Holocaust.“Billy” Wilder initially thought his family died in Auschwitz, but according to research by his Austrian biographer Andreas Hutter, in 2011, they died in different locations. His stepfather Bernard "Berl" Siedliskerdied at Belzec, 1942, his mother died at Plaszow in 1943, and grandmother BalbinaBaldinger also killed in Nowy Targ in 1943.

Arriving in Hollywood, “Billy” Wilder continued his career as a screenwriter and worked on scripts for films like Music in the Air, 1934, and The Lottery Lovers in 1935. He had limited command of the English language and therefore collaborated with other writers to translate his works. In 1937, he began collaborating with Charles Brackett, and they would work for the next twelve years. The first of such works was Bluebeard’s Eighth Wife in 1938 directed by Ernst Lubitsch also on Midnight, 1939 directed by Mitchell Leisen.In 1939, he naturalised to become a US citizen.

Billy Wilder came to limelight with Ninotchka in 1939 starring Greta Garbo. He earned his first Academy Award nomination for the film. After the success of Ninotchka, he came out with the box office hits Hold Back the Dawn¸ 1941 and Ball of Fire in 1942. Wilder made a feature film directorial debut with The Major and the Minor. He then directed the film noir Double Indemnity, 1944 which was a major success and earned Wilder nominations for Best Director and Screenplay at the Academy Awards. He won Best Director and Best Screenplay Academy Award for the film adaptation of Charles R. Jackson’s The Lost Weekend in 1945. His last work with partner Charles Brackett was the dark and cynical film Sunset Boulevard, 1950, which he co-wrote and directed.

“Billy” Wilder directed the film adaptation of Broadway plays Stalag 17, 1953 and Witness for the Prosecution in 1957. At a point, he ventured into directing comedy films including works like Sabrina, 1954, The Seven Year Itch, 1955, Some Like It Hot, 1959 and Love in the Afternoon, 1957, which he co-wrote with writer-producer I. A. L Diamond. The two would continue to collaborate until the end of their career. His other comedic works include The Apartment, 1960, which won an Academy Award for Best Picture with Wilder winning the Best Director and Best Screenplay awards alongside Diamond. His other works include One, Two, Three, 1961, Irma la Douce, Kiss Me, Stupid, The Fortune Cookie, The Private Life of Sherlock Holme, Fedora, and Buddy Buddy.

“Billy” Wilder married twice first to Judith Coppicus on December 22, 1936. They had twins Victoria and Vincent, but Vincent did not survive childhood. They divorced in 1946. He then married actress Audrey Young on June 30, 1949. The two first met at Paramount Picture on the set of The Lost Weekend in 1945.“Billy” Wilder died of pneumonia in 2002 at the age of 95 in his Beverly Hills, California home. He had suffered several health conditions including cancer. He was buried in the Westwood Village Memorial Park Cemetery in Westwood, Los Angeles.

In 1986, “Billy” Wilder received an AFI Life Achievement Award in and the Irving G. Thalberg Memorial Award in 1988. He was awarded the National Medal of Arts in 1993 and has a star on the Hollywood Walk of Fame.