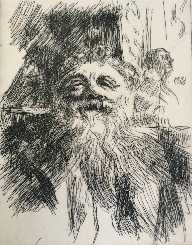 François Auguste René Rodin, popularly known as Auguste Rodin, was an eminent French Sculptor. He is often regarded as the Forefather of Modern Sculpture.

Auguste Rodin was born on 12 November 1840 in Paris, France. His father, Jean-Baptiste Rodin was working as a clerk in the Police Department. His mother was Marie Cheffer, and he was their second child. His parents were of humble means, and Rodin could not pursue any formal education due to their financial constraints.

In his formative years, self-education was the only form of education, Rodin could afford to have. At the age of 10, he started drawing all by himself. During his teenage days he attended the ‘Petite École,’ a school specialized in teaching art and mathematics. He started studying drawing and painting there.

Auguste Rodin twice attempted to enroll himself in the École des Beaux-Arts, a reputed and renowned school of Arts in Paris. Both his attempts were refused and rejected. It is speculated that Rodin, at that time, was being trained in light, 18th Century Sculpture and the Neoclassical tastes of the judges were the reason behind the rejection.

Rodin, a bit unhappy over the repeated rejection of his candidature, spent the next two decades earning a living as a craftsman and ornamenter. He chiefly engaged himself in crafting decorative stone works and architectural embellishments.

In 1862, Rodin’s elder sister Maria died due to peritonitis in a convent. The tragic death severely traumatized Rodin and he abandoned his artistic career and joined the Catholic order, the Congregation of the Blessed Sacrament. The founder and head of the congregation, Saint Peter Julian Eymard realized Rodin’s psychological unsuitability for such an order. He persuaded Rodin to further explore his potential as a sculptor.

Hence, Rodin returned to work as a decorator. Antoine-Louis Barye, the animal sculptor, taught him the finer points of sculpture at this point. The lessons in sculpting he learned at this time; the detailing aspects of the art, the finely rendered musculature of animals in motion became most significant aspects of Rodin’s future works with sculpture.

Auguste Rodin spent the next six years of his life (1864-1870) in the Art Studio of Albert-Ernest Carrier-Belleuse and worked as his Chief Assistant. His work mainly involved designing roof decorations and ornamentation of staircases and doorways. During this period, Rodin offered his first sculpture for official Salon exhibition but was rejected.

Rodin participated in the Franco-Prussian War for a brief period serving the French Army. After the war, he went to Brussels, Belgium and joined hands with his previous employer Carrier-Belleuse in decorating the Brussels public buildings.

In 1875, Rodin visited Italy. He went to Genoa, Venice, Naples, Florence, and Rome. Italy at that time was full of artistic talents and architectural geniuses. The works of Italian greats like Michelangelo and Donatello left a lasting and profound impact on Rodin. Till then he was surrounded by a work culture of monotony and academicism.

It was Michelangelo, whom Rodin gave credit for freeing him from the academic sculpture. Rodin returned to Brussels after his motivational tour of Italy. Taking a cue from his great Italian counterparts, he started his first original work of sculpture, ‘The Vanquished.’ It was his first life-size male sculpture, popularly known to today’s world as ‘The Age of Bronze.’

But the project captioned ‘The Gates of Hell’ eventually became one of the most important works of his lifetime bringing the ever eluding name, fame and wealth to him. After ‘The Gates of Hell,’ Rodin created many independent sculptures. ‘The Three Shades,’ ‘The Thinker,’ ‘The Kiss,’ ‘The Prodigal Son,’ ‘Ugolino’ and ‘The Falling Man’ are some of the notable ones.

In 1889, Rodin completed his most acclaimed and much-admired piece of sculpture, ‘The Burghers of Calais.’ In 1895, it was first allowed for public display. In the following years, Rodin made two distinguished sculptural marvels in the form of two monumental figures of French icons Victor Hugo and Honoré de Balzac. But due to its’ deviation from the conventional taste and perception, French people rejected both the sculptures.

In the year 1900, a large collection of Auguste Rodin’s drawings and sculptures was exhibited at the Exposition Universelle in Paris. This exhibition earned him global recognition as he started getting orders from various foreign countries like the United States, Germany, France, and England. He also served as the President of the International Society of Painters, Sculptors, and Engravers in the year 1903.

Auguste Rodin married Rose Beuret on January 29, 1917. The marriage came after a 53-year long association amongst them. Rodin had met Rose during his formative years at the ‘Petite École’ and started living with her in the year 1864. Their only child, son Auguste-Eugène Beuret was born in 1866. Rodin’s interaction with his son was limited and had essentially abandoned him for six years.

For most of the time, his son, a developmentally delayed child, was under the care of Rodin’s sister-in-law, Aunt Thérèse. Aunt Thérèse also took care of Rodin’s blind and senile father after the death of his mother. Unfortunately, the marital bliss in Rodin’s life was short-lived, and Rose Beuret breathed her last on February 16, 1917.

Rodin had another female companion. In 1883, Camille Claudel came into his life. They shared a passionate and intimate relationship till 1898. They separated after that. Claudia suffered a nervous breakdown after the separation which caused her death.

Rodin breathed his last on November 17, 1917. He was suffering from influenza before his death and died due to congestion of the lungs.