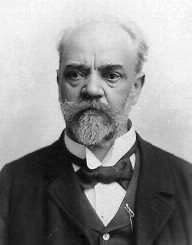 Antonín Dvo?ák was a Czech musician widely regarded as one of the greatest composers of romantic music in the history of humanity. He credited several wonderful symphonies and spread it all over the world by organizing concerts and traveling to far places. Such was the extent of his fame that he was known for his melodies from the West(America) to the East(Australia) and was treated with equal awe in all countries.

One of his most famous pieces is the Requiem which he composed in 1890. His work was largely inspired by and revolved around Czech symphonies.

Antonín Dvo?ák was born on September 8, 1841. His birthplace isNelahozeves, near Prague. His parents were Frantisek and Anna Dvorak. Frantisek worked as a butcher. He was raised as a Roman Catholic and deeply believed in the Church’s ideals. Antonín Dvo?ák loved music, and he went to the village school to receive early training in violin.

Antonín Dvo?ák was only six years old then. Soon he became a good player, and when he was 12, he left for Zlonice to further pursue his education. Antonín Dvo?ák completed his final formal training in music from the Prague Organ School in 1959. When he graduated, he had already mastered music theory and improvisation.

After graduating Antonín Dvo?ák put all his efforts into becoming a professional musician. He had already written his first quartet at 20 years of age. He played the violin at the Bohemian Provisional Theatre Orchestra. To earn more, he also started giving Piano lessons.

Antonín Dvo?ák composed his second quartet in 187t, the same year his first son was born. Two years later, he came into contact with Johannes Brahms. They were mutual fans of each other, and this meeting started a friendship that lasted a lifetime. Antonín Dvo?ák wrote ‘Stabat Mater’ which was first performed in abroad in 1880. He was also invited to London several times after his pieces were successfully performed.  In 1885, his Symphony No. 7 premiered in London.

Antonín Dvo?ák decided to travel across Europe and carried his music to Russia. He was awarded an honorary degree from the University of Cambridge in 1891. In 1892, he became the Director of the National Conservatory of Music, in New York, America.

AntonínDvo?ák wrote the Symphony No. 9 in 1893, titled From the New World – a world famous piece. Dvorak’s popularity escalated everywhere, and he decided to return to his homeland. He even left behind a huge amount of his salary and a large amount of great music that is still remembered today.

Antonín Dvo?ák became less active professionally after returning. He mainly composed chamber music in his later years and became the Director of the Conservatory of Prague in 1901. AntonínDvo?ák continued on this position till his death.

Young AntonínDvo?ák was also a piano teacher. He fell in love with one of his students, Josefina Cermakova.

She, however, was in love with another man. A heart-broken Dvorak found love and companionship from Josefina’s sister, Anna. They married in 1873 and produced nine children – six of whom survived.