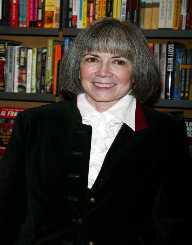 Ann Rice born Howard Allen Frances O’Brien is an American author of Christian literature, gothic fiction, and erotica. Born on October 4, 1941, her famous works include the novel, The Vampire Chronicles published in 1976. In the 1980’s, she started writing sequels for the novel of which two of them, Interview with the Vampire and Queen of the Damned have been adapted into films. Many publishers have also adopted some of the sequels as comics. Despite being born to parents of the Catholic faith, Rice grew up as an agnostic.

Howard Allen Frances O’Brien was born on October 4, 1941, in New Orleans. She is the second child of four by Howard O'Brien and Katherine "Kay" Allen O'Brien who were Catholics. Her father was a World War II Naval veteran and served as a Personnel Executive at the US Postal Service. Her older sister was fantasy and horror fiction author, Alice Borchardt. She added Anne to her name on her first day at school at St. Alphonsus School when a nun asked of her name. She was since addressed as such.

Her name legally became Howard Allen Frances Alphonsus Liguori O'Brien in 1947. Her mother was an alcohol addict and died of it when Anne was 15 years. Her father later married Dorothy Van Bever and moved the family to North Texas.

Anne received early education at the Catholic school St. Alphonsus School and later at St. Joseph Academy. She then attended Richardson High School, where she met her future husband Stan Rice in a journalism class. After graduating in 1959, she enrolled at Texas Woman’s University in Denton where she spent her first year.

Rice was literary works were greatly influenced by writers like William Shakespeare, Charles Dickens, John Milton, the Bronte sisters and Virginia Woolf among several others. In1973, she started writing her first novel Interview With the Vampire. She initially had difficulties getting a publisher for the work. However, at a Squaw Valley Writer’s Conferences, she met her future literary agent Phyllis Seidel. With the help of Seidel, the publishing right of Interview with the Vampire was sold to Alfred A. Knopf with an advance fee of $12,000. The novel was published in May 1976. She followed it with the historical novels Cry to Heaven and The Feast of All Saint alongside the erotic novels Beauty’s Punishment, The Claiming of Sleeping Beauty, Beauty’s Kingdom, and Beauty’s Release.

She wrote her erotic novels under the pen names Anne Rampling and A. N. Roquelaure. Staying from Interview with the Vampire for some years due to some bad critics, she later returned to it writing sequels of it including The Vampire Lestat and The Queen of the Damned, both becoming bestsellers. In 1988, she wrote The Witching Hour and later did the Vampire Chronicles series among several others. A film adaptation of Interview with the Vampire, starring Tom Cruise, Kristen Dunst was released in 1994. In 2002, a film adaptation of Queen of the Damned starring Stuart Townsend and singer Aaliyah was released.

Back To Catholicism And Later Works

After spending several decades as an atheist, Rice finally returned to her Catholic faith in 1998. However, she distanced herself from organized Christianity in a post on her Facebook page on July 28, 2010. Back to Catholicism, she published works like Chris the Lord: Out of Egypt, 2005, Christ the Lord: The Road to Cana, 2008 and Christ the Lord: Kingdom of Heaven, all chronicling the life of Jesus.  Others include Angle Time, and Of Love and Evil. Publishers have adopted several of her works for comics while others are being adapted for theatre productions.

Anne Rice married poet and painter Stan Rice in 1961. They had two children Michele and Christopher who became an author. Michele died of leukemia at age five. Anne and Stan married for 41 years until Stan died of brain cancer in 2002.In the 1970’s Rice developed obsessive-compulsive disorder becoming obsessed with germs.

Rice fell into a coma on December 14, 1998, which was a near-death situation. The cause of the coma was diabetic ketoacidosis, and she was later diagnosed with Diabetes mellitus type 1. Rice shed 103 pounds after undergoing a gastric bypass in 2003.