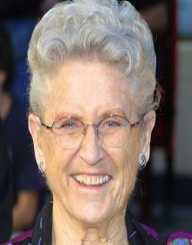 American actress Ann B. Davis was born Ann Bradford Davis in Schenectady, New York on the 5 May 1926. She had a twin sister Harriet and a brother Evans. Her father, Cassius Davis, was an electrical engineer, and her mother, Marguerite Stott, was an amateur actress. When she was a young child, the family relocated to Erie, Pennsylvania where she was raised.

Ann B. Davis graduated from Strong Vincent High School, Erie, Pennsylvania (1944) and then enrolled at the University of Michigan, obtaining a BA in drama (1948).

Ann B. Davis worked in theatre and touring musicals until she was given the role of a secretary on the Bob Cummings Show (1955-1959) for which she won two Emmy Awards. Her film debut was supposed to be a small part in Strategic Air Command (1955) starring James Stewart, but the scene was cut. In 1958, she guest starred on The Ford Show. She was also in the NBC sitcom, The John Forsythe Show (1965-1966), playing the role of a physical education teacher.

In the mid-1970s, Ann B. Davis relocated to Denver, Colorado where she became a member of an Episcopal community. She was never married. She was living in San Antonio with Bishop Frey and Barbra Frey when she died on the 1 June 2014. Her death occurred after she sustained a fall in the bathroom. Davis is buried in St Helena’s Columbarium and Memorial Gardens in Boerne, Texas.

In February 1960, Ann B. Davis was given a star on the Hollywood Walk of Fame.