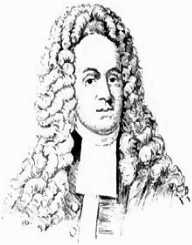 He moved to the U.S. in 1697, where he studied law. Not long after, Joseph Preeson employed Hamilton to manage his plantation.

In 1705, Preeson died. First of all, Hamilton continued to manage the farm. Then, a year later, he also married Preeson's widow, Ann.

Ann's parents were influential members of the Quaker community, and the marriage introduced Hamilton to important people. As a result, he began his law practice soon after.

In 1708, Hamilton bought a 600-acre property in Maryland. He also had a house in Virginia, and for this reason, he practiced law in both places.

By 1712, Hamilton owned a wealthy law practice. He traveled to London that same year to build upon his reputation. There were four societies for barristers in London, and Hamilton joined Gray's Inn.

He practiced law while he was in London, and he became good friends with William Penn and his family. The Penn's were very influential, and, as a result, Hamilton's career grew with Penn as a client.

In May 1715, the Maryland House of Delegates elected Hamilton as their deputy. He became manager of the Committee of Laws, organizing the laws for Maryland. That same year, he moved to Philadelphia.

Four years later, Hamilton joined the local council. He resigned in 1724 and traveled back to London. Penn had died, and Hamilton oversaw the distribution of Penn's will.

Hamilton joined the Supreme Court after returning to the U.S. in 1727. He became master of the Rolls and Recorder of Philadelphia.

In 1729, Hamilton became speaker of the Pennsylvania Provincial Assembly. He held the position until 1739, at which time he retired.

In 1732, the Penn family created a commission, of which Hamilton was one. The role of the group was to mark the boundary between Pennsylvania and Maryland. The Penn's owned Pennsylvania.

Governor George Thomas appointed Hamilton as a judge of the court in 1737, with Hamilton still in the position at the time of his death.

In 1729, the folks of Philadelphia asked for a state house. Because of this, a committee of three men, including Hamilton, took on the task.

First of all, they designed the building and found a site. They started to build, but construction finished after Hamilton's death.

Hamilton and his wife had three children, two sons, and a daughter.

Hamilton accumulated large amounts of land and property during his career, which he left to his children.