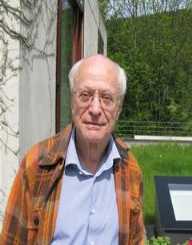 Andre Weil was born on May 6, 1906. He was a French mathematician. He is the mathematician who laid down the foundation of number theory and algebraic geometry. He was also a linguist who was fluent in many languages. He loved mathematics from a young age, especially algebra. He was once imprisoned for neglecting his duties in the French Army but he was released after some time. His whole career was dedicated to mathematical study. He was a brilliant and influential mathematician.

Andre Weil was born on May 6, 1906, in Paris, France. He was born to Bernard Bernhard who was a medical doctor and Salomea Reinherz. He was brought up alongside his sister, Simone Adolphine Weil who became a philosopher. At the age of ten, he had already developed an interest in mathematics. He was also interested in studying different languages. He was religious as he had read the ‘Bhagavad Gita’ in the original Sanskrit by the time he was sixteen years old.

Andre Weil travelled to Germany where he studied the number theory of German mathematicians. In 1928, he joined the University of Paris to receive his D.Sc. His thesis consisted of solving a problem concerning elliptic curves. In 1929, he completed his compulsory military service. He left the military as a lieutenant in the reserves.

In 1930, Andre Weil travelled to India where he taught mathematics at the Aligarh Muslim University, Uttar Pradesh. He taught at the university until 1932. In 1932, he returned to France and taught at the University of Marseille. In 1933, he was appointed at the University of Strasbourg where he served until 1940. In 1939, he was mistakenly arrested for spying on Finland while he was wandering in Scandinavia. In 1940, he returned to France but was arrested again for failing to report on his duty in the French Army. In prison, he proved the Riemann hypothesis for curves over finite fields.

In May 1940, Andre Weil volunteered to go back to the army to avoid a five-year sentence. In 1941, he fled with his wife to the United States of America. They stayed in the United States until the end of the Second World War. He served as the Rockefeller Foundation and at the Guggenheim Foundation while he was in the United States. He also taught undergraduate mathematics at Lehigh University. In 1945, he was appointed at the University of Sao Paulo, Brazil. In 1947, he taught at the University of Chicago until 1958. His remaining career he spent as a professor at the Institute for Advanced Study in Princeton, New Jersey,

In 1979, Andre Weil was awarded the Wolf Prize in Mathematics for his inspired introduction of algebraic-geometric methods to the theory of numbers. In 1980, he was awarded the Barnard Medal for Meritorious Service to Science by the Columbia University. In 1994, he received the Kyoto Prize for his contribution to the scientific, cultural and spiritual betterment of humanity.

In 1937, Andre Weil married Eveline with whom he had two daughters, Sylvie and Nicolette. He died on August 6, 1998, in Princeton, New Jersey. He died at the age of ninety two.