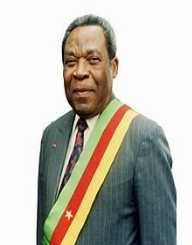 Andre-Marie Mbida was a well-known politician and statesman from Cameroon, who is recognized as an essential figure for gaining independence by Cameroon by the colonialists.

Andre-Marie Mbida rose to fame after becoming the first Cameroonian citizen to be elected Member of Parliament. He later became the head of state for the country and served from 1957 to 1957, when Cameroon was still an autonomous state.

However, Andre soon came into conflict with the French commissioner and was forced to resign from his position. The country later gained independence and Mbinda had significant differences with his former allies that led to his imprisonment then released on medical grounds.

Andre-Marie Mbinda was born on 1st January 1917 in Edinding, which is located in regions in Cameroon called Nyong and Sanaga. Hs parents were Simon Mobile Ongo Nanga and Ngono Veronica. Simon served as the chief for Ngo loogou people and led them in retaliation against German invaders.

Mbinda went to school in Erok for his primary education. Later, he joined `Minor Seminary’ located in Akono whereby he studied for about six years, mainly in mathematics and Latin studies. In 1935, he went to `Major Seminary’ in Mvolye whereby he studied up to 1943. While there, he was able to interact with two individuals that later became presidents in their respective African nations. He graduated in 1943.

Mbida started working immediately after his graduation, as a head teacher at a school located in Blessing. While working there, he pursued his studies further, and in the year 1945, he became a lawyer and was shortly employed in the treasury that was based in Yaounde. During the same year, he worked as a business representative and frequently traveled between Yaounde and Ebolowa. Mbida worked in this position for about nine years.

In 1950, Andre was able to attain apposition in the `French Socialist Party,’ as a result of his linguistic skills. The party was based in France and was under the administration of the French, but was the only active party in Cameroon. In 1952, he contested during the elections and became successful, hence attained a seat in the territorial assembly. The following year, Mbinda was chosen as the official adviser to the French Union and assumed office on 10th October. However, Mbida soon resigned from the party and founded his association called `Coordinating Committee of Cameroon.’

In 1955, an armed uprising was formed and fought against the colonial masters. However, the rebellion was quickly suppressed, and many involved were arrested. Though Mbida was not part of the uprising, he widely advocated for the release of the detained individuals. In the 1956 elections, Andre contested as Member of Parliament, which he emerged winner with a narrow margin, becoming the first native M.P. in the history of Cameroon. He was then appointed a member of two important Parliamentary committees. He then began using his positions to press for Cameroon’s independence. The following year, Cameroon became an autonomous country.

In 1957, the Council of ministers elected Mbinda as `president of the Council.’ As a result, Mbinda became the leader of the autonomous state. During the same year, Andre attended a meeting in the United States where he gave a speech. During the speech, he described Cameroon as a `Pilot State.’ The following year, he had a significant disagreement with French high commissioner for Cameroon and had to resign from his seat in the government.

Cameroon then gained her independence entirely in 1960. In 1962, Mbida in association with other Cameroonian politicians came up with a petition whereby they advocated for a multi-party nation. However, this was not received well by the government, leading to the imprisonment of Mbida and the other politicians. He fell ill during his confinement and was released in 1965 for health reasons. He was then allowed to get medical attention in France in 1966. After recovery, he returned to Cameroon in 1968. He was still confined to house arrest and then freed in 1972.

Andre-Marie Mbida got married to Marguerite Embolo on 14th August 1946. Embolo was a daughter of a tribal ruler, who was very powerful. They had six children together. One of his sons named Loius Tobie Mbida followed his father’s footsteps as a politician and is currently the political leader of a party titled Cameroon Party of Democrats. Another called Simon Pierre Mbinda became a Cameroonian diplomat. During his entire lifetime, Mbida was always a devoted Catholic Christian.

Andre-Marie Mbida died on 2nd May 1980 in France after a severe illness.