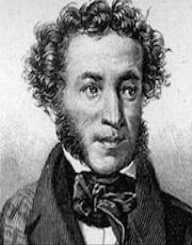 Russian writer Alexander Pushkin was born on the 6 June 1799 in Moscow, Russia into the Russian nobility. His father Sergei Lvovich (1767-1848) descended from an old Russian family, and his mother Nadezhda Ossipovna Gannibal (1775-1836) traced her lineage back to the Scandinavian and Germanic nobility.

One of his ancestors on his maternal side was his great-grandfather Abram Petrovich Gannibal, an African slave who was part of Peter the Great’s household. Gannibal was later ennobled, and Pushkin left an unfinished manuscript of a novel based on his life entitled Peter the Great’s Negro.

The Russian Tsar Alexander I had established the Imperial Lyceum in Tsarkoye Selo as a training ground for future political leaders and Alexander Pushkin was in the inaugural class of 1811. He received a liberal education (1811-1817).

Alexander Pushkin began writing poetry in his early teens and had his first poem published at the age of 15, which brought him to the attention of literary circles in Russia. After his graduation in 1817, Pushkin was employed by the government in the Collegium of Foreign Affairs. Around this time he got involved with a literary circle known as the Green Lantern which was involved with various radical societies that would in time be involved in the Decembrist Uprising.

He published his first epic poem, Ruslan and Lyudmila in 1820, which angered authorities. During 1820 and 1824, Pushkin travelled in the Crimea, Odessa, Chisinau and the Caucasus. His ideas on Greek Independence and his Romantic idealism were reflected in two poems: The Captive of the Caucasus (1821) and The Fountain of Bakhchisaray (1824). At that stage, he had commenced writing Eugene Onegin, a novel in verse.

Alexander Pushkin's political views led him to be placed under house arrest at Mikhailovskoye, the family estate in Pskov Province from 1824 until 1826. In addition to writing Eugene Onegin, he was also working on Boris Godunov (1825). The Decembrist Revolt occurred in 1825, and although Pushkin had lost touch with many of the people involved, authorities discovered his poems when arresting various individuals. Things changed after the death of Alexander I when Tsar Nicholas I came to power.

Pushkin was granted an audience with the Tsar in late 1826 and from that time onwards, he was able to work without censorship, with only the Tsar editing his output. Poltava, a narrative poem was published in 1829. The same year, he travelled to the Caucasus, where he visited Russian Army officers who were engaged in fighting the Turks. Forced to stay in Boldino due to a cholera outbreak in 1830, Pushkin finished Eugene Onegin and published The Belkin Tales.

After his marriage in 1830, Alexander Pushkin lived in St Peterburg where he worked once more for the government in the archival department. He was made a member of the Russian Academy (1933). During this period he published The Bronze Horseman (1833) History of Pugachev (1834), The Queen of Spades (1834),  and The Captain’s Daughter (1836).

Alexander Pushkin met Natalia Goncharova, aged 16, in December 1828 and fell in love at first sight. Her family disapproved of the match. In 1830, he approached Goncharova’s mother a second time, and this time she agreed to allow her daughter to marry Puskin. His father gave him an estate in Boldino, in Nizhny Novgorod Province.

There are many memorials to Pushkin in Russia including theatres, streets, and buildings. There is a town named after him, and plaques and monuments mark important locations of his life.

The pace on Komendantskly Prospekt where he was shot is marked, and in front of the State Russian Museum, there is a statue of Pushkin. His final home is a museum. A film directed by Natalya Bondarchuk, Pushkin: The Last Duel was released in 2006.