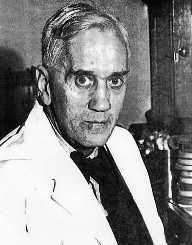 Alexander Fleming was born on 6th August 1881 to Hugh Fleming and Grace Stirling Morten. There were four children, of which Alexander was the third youngest. Morten was Hugh Fleming’s second wife. They were farmers, which would have been a physically demanding role, and Fleming’s father died at the age of 59 when Fleming was just seven years old.

After doing his primary schooling in Scotland, at the age of 13, Fleming received two scholarships to Royal Polytechnic Institution. So he moved to London to take up his scholarships.

In 1903, Fleming went on to study medicine at St. Mary’s Hospital Medical School on the advice of his brother Tom who had become a doctor. Fleming graduated with honors in 1906, with a Bachelor of Medicine and Bachelor of Surgery (known as an MBBS).

Fleming also joined the research team at St. Mary’s Hospital Medical School where he became assistant bacteriologist to Sir Almroth Wright. Wright was a pioneer in vaccines and immunology. Fleming graduated in 1908 with a Bachelor of Science under his belt.

Before beginning his medical studies, Alexander Fleming worked in a shipping office. After inheriting some money, his brother Tom suggested he study to become a doctor, which he did.

Fleming’s areas of expertise were bacteriology and immunology. After he graduated with his Bachelor of Science in 1908, he became a lecturer at St. Mary’s and retained the position until 1914.

During the war, Fleming served as a Captain in the Royal Army Medical Corps. He was mainly in hospitals at the Western Front in France. As many of the soldiers died, Fleming began to wonder why it was that antiseptics, which were used at the time to treat infected wounds, were not working.

Alexander Fleming worked out why, and Wright strongly agreed with him, but he was mostly ignored by army doctors who continued to use the antiseptics even though they weren’t working. In 1918, after the war, Fleming returned to St. Mary’s. In 1928, he was elected Professor of Bacteriology.

Alexander Fleming’s discovery of penicillin changed the world forever. Discovered in 1928, it is still the most used antibiotic in today’s medicine to combat bacterial infections and diseases. He discovered the penicillin by accident, in the mold called “Penicillium notatum.”

In 1929, Fleming published a paper on what he now called “penicillin,” but it was mostly ignored. He continued to work with the penicillin, seeing which diseases it worked on and which ones weren’t cured. During his work, Fleming had trouble producing the penicillin in any quantity. He was also not convinced that the penicillin would stay in the human body long enough to treat the diseases. In 1940, after failing to find a chemist who would help him, he gave his study of the penicillin away.

Not long after, Howard Florey and Ernst Boris Chain continued with Fleming’s research. Fleming joined them when he heard, and by 1945 the antibiotic had been refined and was working. With funding from both the U.S. and British governments, they went into mass production. The rest, as they say, is history.

In December 1915, Alexander Fleming married Sarah McElroy. She was a trained nurse and hailed from Ireland. They had just one child, Robert Fleming. Robert died in 2015. He followed in his father’s and uncle’s footsteps by becoming a doctor.

Alexander Fleming worked tirelessly at his research and was a brilliant man. He was very humble and even tried to not take credit for the creation of penicillin. No legacy is greater than creating the most common antibiotic in the world, which it has been for many years. It was first mass-produced in 1945, and over 70 years later, is still the number one antibiotic. Everybody knows what penicillin is. An antibiotic that has helped cure millions of people, what a marvelous legacy to leave the world.