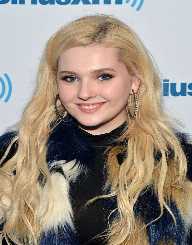 Abigail Breslin is an American actress, best known for her role as Olive Hoover in the film Little Miss Sunshine (2006). Abigail was one of the youngest stars to receive an Academy Award nomination for Best Supporting Actress. She has acted in 30 movies, appeared in 9 TV series, and released a music album. As of 2016, the net worth of this successful actress was estimated at 12 million dollars. The twenty-year-old star lives in New York with her family.

Abigail Kathleen Breslin was born on April 14, 1996, in New York City. Her father, Michael Breslin, is a telecommunications expert and computer programmer. Her mother is Kim Breslin. Ryan and Spencer, her elder brothers, two are actors.

Breslin dated musician Jack Barakat from 2013 to 2014. She is reportedly in a relationship with English actor Freddie Highmore since 2016. Abigail’s favorite food is sushi and pizza, and she loves to collect dolls and stuffed animals.

Abigail Breslin’s first appearance on TV was in a commercial for Toys “R” Us when she was only three years old. When she was five, she appeared in her first movie, Signs (2002), alongside Mel Gibson. The film was a success, and the critics praised Breslin's performance. Later on, in 2004, she appeared in the movie Raising Helen with her brother Spencer.

Abigail’s breakthrough role came in 2006 in the comedy-drama Little Miss Sunshine.  The movie is about a dysfunctional family that goes on a road trip to California so that Olive, played by Breslin, can participate in a beauty pageant. Critics much praised her work and earned her a nomination for the Academy Award for Best Supporting Actress. At ten years old, she was one of the youngest performers to be nominated. She was also nominated for the Screen Actors Guild Award.

From then on, she has continued acting on films, plays, and TV shows. In 2007, Abigail performed on the play Right You Are (If You Think You Are) along with Cate Blanchett, Diane West, Natalie Portman and Peter Sarsgaard. Around that time she also appeared in the movies No Reservations (2007) and Definitely, Maybe (2007).

In 2009, she starred in the drama My Sister’s Keeper, which earned her a Young Artist Award. She was cast as Helen Keller in the Broadway play The Miracle Worker (2010) and was praised by the critics. More recent work includes the films August: Osage County (2012), and Perfect Sisters (2014). As of 2015, she appears in the TV series Scream Queens.

The star has also branched out into other artistic pursuits. In 2015 she released a music album named The World Now and had released three singles (in 2011, 2013, and 2014). She also wrote and published a book titled This May Sound Crazy (2015), in which she shares her insights on life as a young adult.

Abigail Breslin has been nominated for numerous awards throughout her career, beginning with a Young Artist Award nomination for her first movie role in Signs (2003). She was nominated for the same award in 2007 for her performance in Little Miss Sunshine and won. This role also earned her the award for Best Actress from the Tokyo International Film Festival. In 2010, she won a Young Artist Award for the movie My Sister’s Keeper.

In 2013, she received Variety’s Power of Youth Award for her work in Project Sunshine. This is a nonprofit organization that provides children facing medical challenges with educational and recreational programs. Abigail Breslin has been a collaborator since 2007.