The stork spirit animal has long been viewed as a powerful symbol of birth and new life. In short, the stork spirit animal explains how babies come to be. As with new life, these giant birds also symbolize new beginnings that are about to take place in your life. It can be either physically or spiritually. Therefore, individuals should be ready to start new paths in life whenever new opportunities arise. Also, the stork animal totem encourages people to learn new things.

The stork meaning carries new ideas and inspires you to take on new ventures. Despite the stork’s intimidating size, its spiritual values are much more uplifting. Its name is based on Greek etymology for “mother-love”. The mother birds will fiercely guard their nests against predators. That is no easy task, as their nests are some of the largest in the avian community. Also, the stork represents fidelity, provision, endurance, and creativity.

The Stork Symbolism in Our Lives

A new path in life that should be openly embraced is the interpretation of stork spirit animal symbolism. Therefore, you should openly take new challenges and opportunities that might arise in life. Besides, life is unpredictable and full of changes. Just like a baby, things should be slowly learned. Eventually, things will fall into place for the new beginning in life.

What Does Stork Spirit Animal Signify?

How did the story of the stork spirit guide delivering infants originate? Several stories offer a suggestion. First, the stork is a migratory bird that returns to its home when spring begins to blossom. It is the season of renewal and rebirth in nature, not only just for animals but all life forms. Because of this, ancient people associated it and its large beak as the bringer of this new life.

Another meaning of the stork spiritual totem as a baby deliverer comes from its inclination toward the water. On its own, water is highly symbolic of feminine energy, purity, and flowing. These traits are also associated with birth. Rounded bodies of water, such as ponds and lakes, were thought to parallel a female’s womb in the natural world. Wombs symbolize birth and renewal after birth and were considered a substantial illustration of birth and its omnipresence in our world.

Old European folk tales have even made mention of a half-man half-bird creature rising out of the Earth’s womb and bringing new life. Hence, it’s possible that this half-man half-bird was the regal stork emerging from the water with its beak full. The similarities make sense.

What Does Stork Spirit Animal Signify?

When a stork symbol materializes in your life, it is a sign that now is the time for action in your life. The stork moves through both the air and water calmly, peacefully, and with grace, teaching us how to activate our sense of balance to move through life similarly. If we allow it to, it can instill a sense of calm and peace in us, which will help to strengthen you in many areas of your being. It reminds us to be careful with our words and attitudes, remaining calm, cool, and collected in the face of adversity. When we do this, we can be at peace.

Anyone who sees a stork should embrace any change. The change can be either physical or spiritual. Consequently, the new life can be abrupt or planned. All in all; people should embrace the changes since they might mark the beginning of a new life. Just like a baby, everything falls into place at the right time. Hence, evaluate your life anytime a stork appears to you. It will guide you on the things to pursue. Afterward, come up with ways of kick-starting the new life.

What Does Seeing Dead Stork Mean?

A dead stork is an indication that your plans for a new beginning should wait. It applies to both spiritual and physical plans. However, this is a temporary position. The new beginning will soon appear at the right time. It will bring success, happiness, and a sense of accomplishment.

There are two colors in the stork bird, namely white and black. The white color symbolizes that it’s the right time to execute your ideas. Additionally, you are more likely to succeed in your chosen path and search for a new life. On the other hand, the black color asks you to hold on to your plans as the right time will soon come. Also, you might not finish what you started at the moment.

The stork spirit animal meaning explains the importance of time. Thus, don’t rush for a new life when situations are not favorable. On the contrary, learn to evaluate situations before starting anything in life. Some instances require patience until the path is favorable.

Also, a new beginning in life can be attained through efforts. Therefore, plan how you will attain your goals and the duration. It brings order to how things will run until the desired life is attained. You should also be ready to learn new things in the quest for a new and happy life.

The stork symbol also played a large role in Roman mythology. As a sacred symbol to Juno, the goddess of the hearth and home, the stork emulated her fierceness in protecting what matters most to her. Hera, her Greek counterpart, was also depicted with storks frequently. Known for her ferocity in the protection of the home, Hera is still considered by many to be the reason fires in the hearth continue to burn. In these mythologies, the stork animal guide symbolizes more of the protective side of maternal instincts as opposed to physical birth and the womb.

These gargantuan birds can also help us to get in touch with and understand our emotions. When the stork enters our dreams, we should take it as a call to examine our relationships, particularly with our family members. Maybe you have lost touch with your roots and let your most fundamental connections whither a bit. The stork symbolism tells us to get back to the basics and never take the strength of the family unit for granted.

The Stork spirit symbolizes dreams come true. Everyone does a better life at some point in life, isn’t it? Hence, seeing stork should be a motivation. It is a sign that your dreams might become a reality and symbolize the beginning of a new chapter. Simply identify how you desire your new life. Afterward, work towards your objectives.

Also, understand that dreams are not accomplished within a day. It is a continuous process that requires patience and hard work.

All the Stork Associated Traits 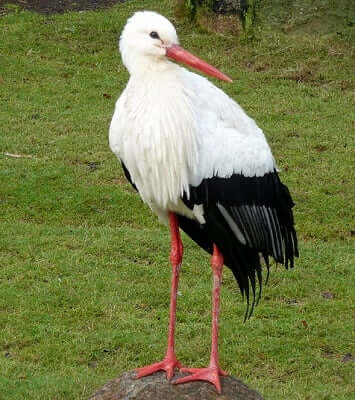 You might have cut ties with your family members for various reasons. It’s time to reach out to your loved ones and reconnect. A fulfilled life should be filled with love from family members. Besides, everyone needs family in life.

Stork also symbolizes taking care of those around you. It entails ensuring everyone is well and has the basic needs. The stork animal also represents peace. A peaceful environment allows you to concentrate on the important things in life.

In conclusion, the stork spirit animal signifies a new beginning in life. Therefore, identify an important path in life to pursue and remain dedicated. Your dreams might become a reality.