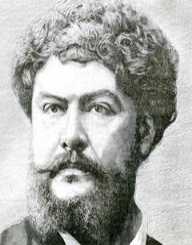 Alfred de Musset was born on December 11th, 1810 to an upper-class but poor family. He was the son of Victor de Musset with his wife a society hostess. His father held some key positions in the government at that time. He was best remembered for his role as editor and biographer of Rousseau. However, he would never give Alfred any money. This made him an independent individual from a young age. His older brother Paul de Musset was Alfred’s greatest supporter of his writing talent.

Alfred de Musset enrolled in Lycée Henri-IV when he was nine years old. By 1827 he attained his honors and was also awarded the Latin essay prize. Initially, he had an idea of pursuing medicine but thought against the idea since he was not a fan of dissections. He also tried other career choices like drawing, English, and even law but made up his mind to be a writer at the end. He went with his heart for he knew writing was his passion.

In 1829, Alfred de Musset wrote the first of his poem collections. He gave it the title ‘Contes d'Espagne et d'Italie.’ The poems were a success which marked the beginning of a successful career for Alfred. His first play in 1830 was La Nuit vénitienne. This play among other plays he wrote until 1847 was not performed. The response from the audiences was, unfortunately, were quite low.

Some of the other plays he wrote include the 1834 On ne badine pas avec l'amour. In 1335 he wrote Le Chandelier and Il faut qu'une porte soit ouverte ou fermée in 1845. During this time he also wrote novels and short stories such as Croisilles in 1839.

Alfred de Musset later worked at the French Ministry of the Interior. He served as a librarian to the ministry which was under the July Monarchy at the time. He was relieved of his librarian duties in 1848 by Ledru-Rollin who was the new minister after revolution. He became a librarian once again in 1853 but this time in the Ministry of Public Instruction. He wrote the poem Œuvres posthumes in 1960.

Alfred de Musset was awarded the National Order of the Legion of Honor in 1845. This honor was the top decoration in France. He also attained a membership at the French Academy which was a great honor.

Alfred de Musset was romantically involved with Amantine Dupin around 1833. He was deeply in love with her. They broke up later which broke Alfred’s heart a great deal. He would later write some of his best work based on this experience.

Alfred de Musset died of heart failure on May 2, 1857. He was laid to rest in Père Lachaise Cemetery located in Paris. He was 46 years old at the time of his death.