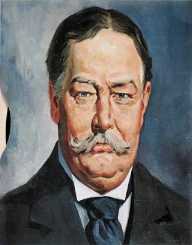 William Howard Taft was born on the 15 September 1857 in Cincinnati, Ohio. He came from a distinguished legal and political family. His father had served as the Secretary of War and the Attorney General under Ulysses

William Howard Taft went Woodward High School in Cincinnati. He did well academically, excelling at mathematics. He was also good at sport and played baseball.  After graduating from high school, Taft enrolled at Yale University and then, like his father before him, Taft studied law. He passed his bar exam in 1880.

After graduating, William Howard Taft ran a successful law practice in his hometown. He then held various government positions including being a US Court of Appeals judge and the Ohio Superior Court, Solicitor General under the Harrison presidency. He was hoping that his work would provide a route to the job he really wanted:  to be on the U.S. Supreme Court bench.

Rise To The Presidency

In 1900, President McKinley sent William Howard Taft to the Philippines as governor and he served there for four years. Returning, in 1904, President Theodore Roosevelt appointed him as the Secretary of War. It was during this time that he oversaw the construction of the Panama Canal. Taft was offered a position on the Supreme Court bench a number of times, but he was obliged to turn it down because of his commitment to Roosevelt. In 1906, he became Temporary Governor of Cuba because of political tension in the area. The US had occupied Cuba because of concerns about war relating to Japan and Russia. Taft's was repaid for his loyalty and dedication when at the end of his second term in office, Roosevelt put Taft’s name forward for president. He was nominated at the Republican Convention in 1908. Taft was reluctant at first but was encouraged by this family to run. He ran for President and became the 27th President of the United States in 1909.

William Howard Taft spent four years in the White House. Initially, progressives were happy with Taft's election and the conservatives were just pleased to be rid of Roosevelt, referring to him as the mad messiah. Eventually though they became unhappy with his policies and his presidency was overshadowed by the infighting between the conservatives and the progressives. He ran at the next election but was beaten and Woodrow Wilson became the next president.

Despite the infighting, William Howard Taft accomplished a lot in four years.  These major achievements include:

Establishing a parcel post office, the 16th amendment relating to a federal income tax; worker safety, wage standards, and unemployment insurance.  The 17th amendment was passed relating to the elections of US Senators by the people. New Mexico and Arizona were added making Taft the first to preside over forty-eight states. One of his more unpopular moves was to continue Roosevelt's work of breaking up monopolies and trust. Another unpopular policy was his Dollar Diplomacy foreign policy initiative and the reduction of tariffs. These unpopular measures meant that he lost party support.

Taft was a large man, weighing over 300 pounds and he once got stuck in the bathtub at the White House.

In 1930, Taft died of heart failure and is buried at the Arlington National Seminary.

William Howard Taft created the Chamber of Commerce in 1912. Taft worked on issues regarding big business and taxes, using the 16th Amendment to place a new tax on large corporations. There is an avenue named after him in Manila in the Philippines.