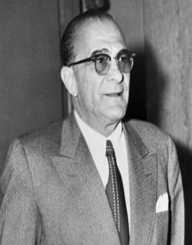 Vito Genovese was one of the most powerful Italian-American mafia bosses in the twentieth century.

Vito Genovese was born on November 27, 1897, in the small village of Tufino in Italy. As a child, he only spent a few years at the school. When he was fifteen years old, his family emigrated to New York City.

Vito Genovese started engaging in criminal activity at a young age. He joined local gangs in Manhattan. He began performing smaller errands for them, such as stealing from shops and collecting money from debtors. At the age of nineteen, he spent one year in prison for illegal possession of a firearm.

In the 1920s, Genovese started working for Giuseppe Masseria, the boss of a prominent gang. His most useful quality was his tendency to violence. In 1930, he was indicted for counterfeiting money. After that, he was suspected of murdering Gaetano Reina, the leader of another gang who had betrayed Masseria.

In 1931, the Castellammarese war broke out between Masseria and his sworn rival, gang leader Salvatore Maranzano. Genovese soon started conspiring with his old friend Lucky Luciano. First, they shot their boss Masseria in a restaurant in Coney Island. His rival Maranzano now became the leader of all major gangs in the area. A few months later, Genovese and Luciano murdered him as well.

In 1934, Vito Genovesesupposedly killed mobster Ferdinand Boccia. He did not want to split the money they had earned from cheating a wealthy gambler. In 1936, he became the new boss of the Luciano crime family after Luciano had gone to prison for pandering. The same year he became a citizen of the United States. In 1937, he decided to flee to Italy because he feared being prosecuted for killing Boccia.

Genovese quickly continued his crime in Italy. He ran a massive black-market operation with the Sicilian mafia. He became an active member of the fascist party and a supporter of dictator Benito Mussolini. When the Allies occupied Italy in 1943, he started helping the U. S. Army. He quickly became a trusted employee. Nobody seemed to know about his past.

In 1944, the U. S. military police arrested Vito Genovese for stealing their resources. The investigator also found out he was a fugitive hunted for murder. Despite the pressures and threats, he managed to send him back to the US for his trial. In 1945, Genovese arrived in New York City. He was accused of murdering Boccia, but he pleaded not guilty. In the next few months, all the witnesses that were supposed to stand against him ended up dead. The court had no choice but to set him free.

After being released from prison, Genovese was able to return to the Luciano, crime family. However, he could not assume a high position as he initially planned. The ruling leaders did not let him become a boss, so he started making plans to get rid of them. Through a series of murders and shady deals, he ultimately rose to become the boss of the Genovese, crime family.

In November 1957, Genovese arranged a meeting of many mob leaders on a small farm in a rural part of the state of New York. The meeting later became known as the Apalachin Conference. The police found out and raided the area, but everyone managed to escape.

In 1959, Vito Genovese was sentenced to fifteen years in prison for importing and distributing heroin. Many criminal experts believed he was being set up. It was unusual for crime bosses to be directly involved in a deal because that meant they could easily get caught.

Even in prison, Genovese continued to exercise his influence in the mafia. He ordered the murders of several men who have wronged him, such as Anthony Carfano, Anthony Strollo, and Ernest Rupolo.

Vito Genovese died from a heart attack in federal prison in Missouri on February 14, 1969. He was buried at the Saint John Cemetery in Queens.