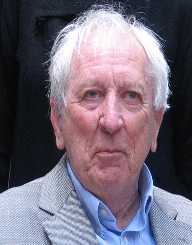 Tomas Transtromer was Swedish poet and Psychologist. He is considered one of the most important Scandinavian poets since the Second World War. His notable works are The Half Finished Heaven, Windows and Stones, Baltics, For the Living & Dead, and The Sorrow Gondola. His poems capture the beauty of nature and mystery of everyday life. He was awarded the Nobel Prize in Literature in 2011.

Tomas Transtromer was born to Gosta and Helmy nee Westerberg on 15th Apr 1931. His parents divorced when he was three years old. He grew up with his mother, who was a school teacher. He spent summers at his grandfather’s place in the island of Runmaro. This influenced his poetries especially Osterjoar and Baltics. He was also interested in entomology and collecting insects. A newly discovered beetle bears his name Mordellistena transtroemeriana.

Tomas Transtromer's secondary education was in Sodra Latin Gymnasium, and he graduated in Psychology from Stockholm University in 1956. His additional subjects included history, religion, and literature. He showed a keen interest in music and played the piano.

Tomas Transtromer began writing poems at an early age and published them in journals. His collection of poems called 17 Poems was published in 1954. As a Psychologist, he worked with juvenile offenders at Roxtuna but continued writing poetry.

Tomas Transtromer published 15 collected works which have been translated into 60 languages. Robin Fulton published his translated works ‘New Collected Poems’  in 1987 and later expanded it in the years 1997, 2006, and 2011. In 1992 Tomas published a short autobiography ‘Minnena ser mig’ (The memories see me).

Tomas Transtromer suffered a stroke in 1990. He was paralyzed on his right side and unable to speak. He, however, continued writing and publishing his poems. Den stora gatan was released in 2004 and translated into English as The Great Enigma in 2006.

Tomas Transtromer's poems can draw out great and beautiful things from the mundane. His lyrics capture the Swedish winters and seasons. Rich, keen and original imagery marks it. In later years he shifted from traditional and native poetry to a darker, personal and more open verse. His quest for transcendence and trying to understand the unknown is seen. His poems seem to say that instruments of sensuality can only sense the inaccessible regions of the mind.

Tomas Transtromer successfully combined factual observation of a Psychologist with the metaphorical reality of dreams.

Relationship with other poets

Tomas Transtromer was a close friend of Robert Bly and frequently corresponded with him from mid-1960’s. Their correspondence from 1965 – 1991 was released through a work called Air Mail by Bonniers, his publisher in 2001. Bly also arranged poetry reading sessions in America.

The Syrian poet Adunis accompanied Tomas to the Arab world and helped spread his work.

Tomas Transtromer went to Bhopal after the gas tragedy in 1984. He took part in a poetry reading session in India with Indian poets like Sachidanandan.

His poem was read at Anna Lindh’s memorial service in 2003.

Tomas Transtromer played the piano throughout his life. When the stroke in 1990 left his right side paralyzed, he learnt to play with his left hand. Many composers like Jan Garbarek, Maurice Karkoff, Frederic Jakobsen and others have worked with his poems. His daughter is a concert singer and released the album Dagsheja which contained songs based on his poems.