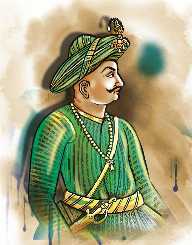 Also Known For : Ruler Of The Kingdom Of Mysore

Tipu Sultan was born on November 20, 1750, in Devanahalli, Kingdom of Mysore (currently India). His parents were Fatima Fakhr-un-Nisa and Hyder Ali.

Tipu Sultan grew up in a strict household, as his father was a part of the military. Because of this, Sultan was raised and educated with military values. Even as a young teenager, he would often accompany his father on missions. He even was able to contribute strategies and other helpful tasks to these missions.

Once Tipu Sultan was old enough, he joined the military on his own accord. Since he already had accompanied his father on missions, he knew much more about military life than the average new soldier. It was not long before Sultan was given control over the port of Mahe, meaning that it was his job to protect this area. Sadly, in 1779, British soldiers captured his port. It wasn’t until 1780 that he won the port back.

Soon after, Tipu Sultan became invested with fighting in the Second Anglo Mysore War. It was during this war that Sultan’s father died (of cancer). Because of his father’s death, Sultan became the new ruler of the Kingdom of Mysore.

Having a military background, Tipu Sultan focused on improving Mysore’s military so they would do better in conflicts against the British army, as well as the armies of other European nations. One way he improved his chances of winning a fight against the Europeans was by allying himself with nations near his. By doing these things, he successfully ended the Second Anglo Mysore War by signing a peace treaty with the British in 1784.

After the war was over, Tipu Sultan focused on continuing the programs that had been paused since his father’s death. Many of these projects were like work projects now. He commissions bridges, buildings, and other types of architecture. At the same time, he also worked on continuing to improve the military.

Once the Kingdom of Mysore was more or less recovered from the Second Anglo Mysore War, Tipu Sultan began putting his sights on expanding his kingdom by taking the lands of nearby areas. He first went after Travancore, which was an ally of the East India Company, which meant that it was more or less fair game for Sultan to try to take. He began attacking the area in 1789. However, the army of Travancore was more powerful than Sultan expected it to be. The beginning of this conflict also marked the beginning of the Third Anglo Mysore War.

At first, the Mysore army was great at defeating the army of Travancore. However, the people of Travancore soon used their alliance with the East India Company to their advantage. The East India Company army worked against Sultan and his army. In 1790, the army had taken part of Sultan’s land. He fought back but lost more battles than he won. In 1792, Tipu Sultan signed the Treaty of Seringapatam. With this treaty, he lost the war and some lands from Mysore as well as other territories.

Just a few years later, in 1799, the Fourth Anglo Mysore War began when the East India Company, along with some allies, attacked the Kingdom of Mysore. During the war, the capital of the Kingdom, Srirangapatna. Tipu Sultan wouldn’t go down without a fight. He fought alongside his army. This, however, would eventually result in his death. He was succeeded by Krishnaraja Wodeyar III.

The TV series The Sword of Tipu Sultan was about his life.

The PNS Tipu Sultan as a navy ship (Pakistan) was named after him.