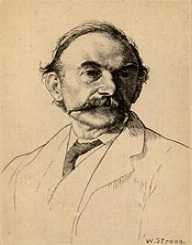 Thomas Hardy was an English writer of both prose and poetry at the turn of the 20th Century. He was quite critical of Victorian England, preferring the Romantics to his contemporaries. Hardy wrote poetry for most of his life and published influential poetry later in life, but he began his career with novels such as Far from the Maddening Crowd (1874) and Tess of the d’Urbervilles (1891). His critiques of Victorian notions of religion and propriety caused critics to lambast his later novels.

Thomas Hardy was born in Higher Bockhampton (Upper Bockhampton), Dorset, England on June 2, 1840. His father, Thomas, was a stonemason, and his mother, Jemma, was an avid reader. Hardy was educated by his mother until he was eight years old, and then he was sent to school until the age of sixteen. At that time, he became an architect’s apprentice. After a time, Hardy was able to study at King’s College London in 1862. His architectural work won awards, and he went to work for Arthur Blomfield. Hardy did not care for London, as he felt the class system was especially prevalent there. Since he came from a rural background, he never felt entirely welcome.

Thomas Hardy wrote his first novel, The Poor Man and the Lady, in 1867, but he could not find a publisher. After showing the novel to a fellow writer named George Meredith, he discovered that his work would be taken as too political to be accepted. Hardy was advised to move on, which he did. His next works were Desperate Remedies (1871) and then Under the Greenwood Trees (1872). Both were published anonymously. A Pair of Blue Eyes was initially released as a serial from 1872 to 1873 and is said to be based on the courtship of his first wife, Emma. It marked the first time he published under his name.

Far From the Maddening Crowd (1874) was enough of commercial success for Hardy to quit his job as an architect to focus on writing full time. After this, he moved his family out of the London he despised and into Yeovil, located in South Somerset. Once there, he published The Return of the Native (1878), Two on a Tower (1882), and The Mayor of Casterbridge (1886), all of which were successful.

Then, in 1891, Thomas Hardy finished Tess of the d’Urbervilles. Today, this novel is considered an important work, but in his day, the critics panned it. The story a sympathetic portrayal of a “fallen woman.” This did not sit well with the Victorian public. Another novel, Jude the Obscure (1895), earned an even worse reception. Some booksellers sold the book in brown bags to hide the cover. Others didn’t sell it at all. Again, he challenged Victorian ideas about sex, marriage, and religion.

Some years later, after the dust settled from his controversial novels, Thomas Hardy turned to publish his short stories and poetry. In 1898, he published a volume of his poetry entitled Wessex Poems and Other Verses. This contained 51 poems he had written over the previous 30 years. It, too, met with a hostile critical reception for being “too bawdy.” Hardy is also known for his many war poems. These covered the Napoleonic Wars, the Boer Wars, and even World War I.

Again, even though Thomas Hardy's poetic works weren’t well regarded by his peers, more modern poets and scholars celebrate his works. Poets such as Robert Frost, Dylan Thomas, and Philip Larkin all point to Hardy as an influence. Lastly, Hardy tried his hand at drama, writing Dynasts: An Epic-Drama of the War with Napoleon (1904-1908) and The Famous Tragedy of the Queen of Cornwall at Tintagel in Lyonnesse (1923).

Thomas Hardy met his first wife, Emma Lavinia Gifford in 1870 and married her in 1874. They were estranged (which caused much gossip) from the late 1880s until her death in 1912. Hardy never recovered from her death, even when he remarried in 1914 to Florence Emily Dugdale. Florence was his secretary and 39 years younger than he. When he died in 1928, his ashes were interred at Westminster Abbey and memorialized at Poets’ Corner. His heart was buried at Stinsford with Emma.