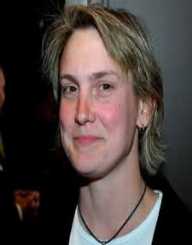 Stacie Andree is one lady who took up the fight for gay rights in the year 2005 through to 2006. Her main reason to join the battle for gay rights came when their country was trying to deny her partner's pension benefits. Laurel Hester was her partner. So, in the year 2005 at the point when Laurel learned that she was terminally ill. She chose to leave her partner Stacie Andree her pension benefits.

However, the state would not hear of it. This led to a fierce battle that they won shortly before Laurel's death. The story of their life during this period made an Oscar-winning movie- Freeheld. It aimed to show the struggle that the lovely couple went through. The famous openly gay actor Ellen Page took the role of Andree in the film.

The Path to Love

Stacie L. Andree met with her future lover Hester in the year 1999 at a game of volleyball in Philadelphia. At the time they met Hester was 19 years older than Stacie. However, they fell in love with each other anyway. So, after a few years of dating, they decided that they would in together. They then bought a house at Point Pleasant in New Jersey. During their domesticated life, they had different roles in the house.

Stacie took up the part of the improvement of the home while Hester took the role of decorating the house. In the year 2003, the state of New Jersey had passed a Domestic Partnership Bill. So, the couple took up the advantage to enjoy equal marriage rights like everyone else. Therefore, the following year, they registered their partnership on October 28, 2004.


The Struggle for Benefits

Sometime around the fall of the year 2004, Hester got the diagnosis of terminal lung cancer. She knew that she was going to die. Moreover, her partner Stacie who was working as a mechanic was not earning enough to cover the mortgage on their house. So, she decided to leave Stacie her retirement benefits. Besides, the most likely case was Stacey being forced to sell their home before the bank could foreclose on it.

Furthermore, Hester was a civil servant under the Ocean County in New Jersey for over two decades. So, she was legible for a fat pension to take good care of her partner. However, the local government in New Jersey had not transitioned into offering civil servant workers their spouse’s pensions. Moreover, the local governments were not under any legal obligation to provide the partner of their workers any retirement benefits. Although, the domestic partnership was under the same laws. Also, the employer of Hester had not bothered to expand their program to cover domestic partnership.

Push for Equality And Equity

After the local government and her employer turned them down, they sought help from the gay rights group. The support from the Garden State Equality and vigilant supporters cried the two ladies momentum. The attention of many people and officials were drawn to their case. Also, Stacie found that she had the platform to address some of the many issues that they were having. Moreover, they could also send the criminal mistreatment of the gays.

In the year 2006, Stacie and Hester were called to attend one of the freeholders meeting in December. However, Hester was too sick to go. So, she made a recording for the people who were to listen to their plea. Hester by then was in horrible shape. However, despite all the efforts, the five Republicans failed to act upon the appeal. So, they left their decision stand.

Based on the ongoing social media frenzy that Stacey and Hester’s case was drawing Jon Corzine stepped in. He together with other politicians placed their concern on the case forcing the freeholders to change their position. So, on the 25th of January of 2006, the freeholder did the right thing and changed their votes for the affirmative. There was happiness in the precedent set through the struggle, and all were happy. The couple thanked their supporters and retired back to their lives. However, almost a month later Hester scammed to her sickness. She died on the 18th February 2006 at her lover side.

The fight for Stacey to attain the pension of her partner lives on in an emotional film. The producers even went ahead to film the last struggles of the couple. The film is also educational on the suffering that the gay people go through. Especially through legal and political unjust discriminations. Stacey had decided to retreat into her quiet life after Hester's death. However, upon the release Freeheld documentary, she came back to the limelight. The movie won an Oscar Award in the year 2008. Later Hollywood going by the documentary of Freeheld made the movie Freeheld. It premiered at the Toronto International Film Festival in 2015.