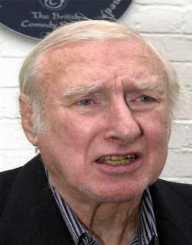 Comedian, poet, writer, and actor Spike Milligan was born Terence Allan Milligan on the 16 April 1918 in Ahmednagar, India where his father was stationed as a captain in the British Army. His mother was an Englishwoman, Florance Kettleband and his father, Leo Alphonso Milligan, an Irishman from Sligo, Ireland. He was raised in Pune, India, and Rangoon before the family relocated to London when he was 12 years of age. He had a brother Desmond.

Spike Milligan was a pupil at the Convent of Jesus and Mary, Pune as well as at St Paul’s High School in Rangoon. When the family relocated to London, he was schooled at Catford Boys School, St Saviours School and South East London Polytechnic in Lewisham.

Spike Milligan's first job was working in a nuts and bolts factory in London, but he already had the ambition to become an entertainer. He learned to play the trumpet, ukulele, and guitar and was interested in jazz music. During this time he won a Bing Crosby singing competition that was held at the Lewisham Hippodrome.

During World War II, Milligan was enlisted for military service. Serving with the British Army in North Africa, he met Harry Secombe, with whom he would later collaborate with on The Goon Show. In the army, he organised comedy and music shows with the armed forces organisation Ensa. Later in the war, he was wounded in Italy. He wrote about his wartime experiences in his books Adolf Hitler My Part in His Downfall (1971), Monty, My Part In His Victory (1976) and Mussolini, His Part In My Downfall (1978).

Returning to London after the war (1946), Spike Milligan initially found it difficult breaking into the entertainment industry. He met again up with Harry Secombe who was in a similar position and was introduced to Peter Sellers and Michael Bentine. The four young men used to meet up in Jimmy Grafton’s pub in London. The Goods emerged out of the men entertaining each other with their various comedy routines in the back room of the pub.

Grafton was also a writer who wrote gags for Derek Roy, a radio comedian and he asked Milligan to co-write with him. Meanwhile, Secombe and Sellers had started working in comedy on radio. Milligan wrote gags for them as well. Then Sellers came up with the format for The Good Show and approached the BBC with the idea.

The Goon Show began in May 1951 with Milligan, Sellers, and Secombe. Bentine had left because of a personality clash with Milligan. The success of the show meant that it ran for nine years, broadcasting 26 shows per annum. The Goons also toured as a stage show. Milligan wrote all the material for The Goon Show, sometimes with Grafton, Larry Stephens or Eric Sykes. The show ended in 1960. He had a nervous breakdown which he blamed on the pressure of The Goon Show and his first marriage failed shortly afterwards.

Spike Milligan's first project after The Goon Show was portraying Ben Gunn in the play Treasure Ireland, which was staged at the Mermaid Theatre in London. The play was a success, and his next project was The Bed-Sitting Room. He co-wrote the play with John Antrobus and was staged at the Mermaid Theatre, the Duke of York’s Theatre and the Comedy Theatre (1963). The Bed-Sitting Room was later adapted for film.
His next play was Oblomove, at the Lyric Theatre, Hammersmith (1964).

On British television, he appeared in Q5 and The World of the Beachcomber, and he often appeared on radio and television chat shows. Films included The Magic Christian (1971), The Devils (1971), The Three Musketeers (1973), The Last Remark of Beau Geste (1977) and Monty Python’s Life of Brian (1978). Milligan also toured internationally with his comedy routine

Spike Milligan's first wife was June Marchinie (m.1950 - div.1962). The couple had three children: Laura, Sean, and Sile.  In 1962, he married Patricia Ridgeway, and they had a daughter Jane. Ridgeway died of breast cancer in 1978. Then, in 1983; he married Shelagh Sinclair. He had a relationship with Margaret Maughan, and they had a son, James in 1975.

Milligan's parents and brother had immigrated to Woy Woy, Australia and Milligan used to visit the town in his later years. At one time there was a Spike Fest held in the town which celebrated his work.  A cycle bridge in the area,  the Spike Milligan Bridge, was named after him. Milligan died of kidney disease on the 27 February 2002 at his home in Rye, Sussex, England. Milligan left his entire estate to his third wife, Shelagh Sinclair Mullighan. His adult children contested his Will, but it was upheld. His wife died in 2011.

Spike Milligan suffered from Bi-Polar Disorder and had many mental breakdowns. He also had issues with alcoholism and depression.

In the 1960s, Spike Milligan started in an ITV sitcom entitled Curry & Chips. The show was written by Johnny Speight, and it aimed to highlight racial issues in Britain. Instead, it was considered offensive and taken off air after six episodes.