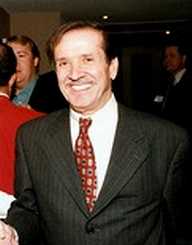 Sonny Bono is an American actor, singer, producer, and politician born on February 16th, 1935. He is best known as part of Sonny and Cher pop duo. From 1988 till 1992, Bono was Palm Springs’ 16th Mayor. Also, he represented California's 44th district in the US House of Representatives. This is a position he held till the time of his death.

Besides politics, Sonny Bono has also starred in movies. He featured in Airplane II: The Sequel in 1982. His music career began in the mid-1960s. During this time, he had the honors of working close with Phil Spector and Sam Cooke among others. Throughout his life, Bono wedded four wives and had five children. He was married to Mary Bono at the time of his death. His son Chaz Bono followed his singing footsteps. He is a musician and reality personality.

Sonny Bono was born Salvatore Phillip Bono in born in February 16th, 1935. His place of birth was in Detroit, Michigan in the United States of America. He was the youngest child of Sicily immigrants Santo Bono and Zena. The name Sonny was a nickname from his mother. His older sisters were Fran and Betty. At the age of seven, Sonny Bono and his family relocated to Inglewood in California.

Sonny Bono joined Inglewood High School but dropped before his graduation. For him to earn a living, he had to take many odd jobs. First, he took a waiter job then became a truck driver. Just before he began his music career, he was a construction worker

Sonny Bono began his career as a musician in 1960s. This is after meeting with Cherilyn Sarkisian or Cher who later became his girlfriend and later his second wife. Cher was a great impact on Bono’s life as far as music is concerned. The two formed Sonny and Cher duo.

In 1965, the duo went to the greatest heights of their career with "I Got You, Babe,” The song appeared in the top charts of pop songs. After the hit song, the duo never looked back. They continued releasing new hits like "Baby Don't Go.” Also, they released the hit song “The Beat Goes On” in the coming years. Sadly for Bono, his music career faded when he went separate ways with Cher.

After his break up with Cher, Sonny Bono decided to venture into politics and became a conservative Republican. In the late 1980s, he ran for Palm Springs California’s mayor position. Luckily, he won the position. From 1988 to 1992, he served the people of Palm Springs as their mayor.

In 1992, he tried for Senate post. Unfortunately, he lost in the elections. However, he became Representative from 44th Congressional District of California two years later. His conservative views as a member of the Republican Party made him quite famous.

In November 1954, Sonny Bono tied the knot to Donna Rankin. In 1958, the couple was blessed with a daughter and named her Christine or “Christy” in short. The two parted ways after their divorce in 1962.

Subsequently, Sonny Bono wedded his second wife in 1964, this time to Cher. She was a singer and actress. They had a son Chaz in 1969. Sadly, their marriage also ended in divorce in 1975.

For the third time, Sonny Bono wedded another wife Susie Coelho but divorced once again in 1984.

In 1986 he married Mary Whitaker. They had a son and a daughter.

Sonny Bono took his last breath on January 5th, 1998 following injuries from an accident he suffered. He was still married to Mary Whitaker at the time. Sonny Bono was laid to rest in Desert Memorial Park situated in Cathedral City in California.