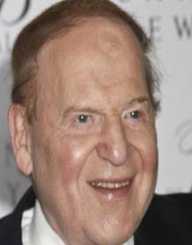 American business tycoon, investor, and benefactor Sheldon Gary Adelson were born on August 4, 1933, in Dorchester, the largest neighborhood in Boston, Massachusetts, United States of America. Born into a family of modest means, Sheldon had to start generating income on his own at a very young age.

His father, Arthur Adelson, a Lithuanian immigrant, worked as a taxi driver and also sold advertisement as a side business. His mother Sarah Adelson had a small knitting business. Sheldon began to work as a newspaper seller in Boston after purchasing a license for the same with an amount of $200 taken as a loan from his uncle.

Sheldon Adelson started selling toiletries as his independent business by the age of 12. By the age of 16, he began a candy-vending-machine business having borrowed money once again from his uncle. He enrolled at the City College of New York during the early 1950s with the intention of studying corporate finance.

However, he left college without graduating before completion of his term. He joined the United States Army and took up the job of a court stenographer after having served the army briefly.

While working as a court stenographer, he had the opportunity to meet new people of diverse nature and thus, was able to make new connections with the people connected with the business world. He landed a job of a mortgage broker and investment advisor through one such relationship and made his first million dollars.

After having earned a substantial amount of money as a mortgage broker and investment advisor, Sheldon Adelson moved back to Boston and started investing in various small businesses as well as in real estates. Diversifying in travel and tour business, he began a charter travel business named American International Travel Service. With his sharp business acumen, he successfully steered the start-up into a multi-million dollar business within a short span of a few years.

However, his fortune nosedived during a stock market crash in the late 1960s. His uncanny ability to take risk saw him lose large sums of money several times in his business career. He rose like a sphinx again each time he lost a fortune.

During the late 1970s, the American personal computer industry was on the verge of rapid growth. The big computer brands like Apple, Microsoft, and IBM, were gearing up for great extensions of their businesses. Sensing the opportunity, Sheldon Adelson launched a computer industry trade show titled COMDEX (Computer Dealers Exposition), where these big brands were able to present their products to the prospective customers and other companies.

The first show of COMDEX was held in 1979 at the MGM Grand Hotel in Las Vegas, Nevada. Sheldon gained substantially from this interface group has earned a net income of $250 million by the end of the decade of the 1980s.

Sheldon continued to diversify his business interests, and by late 1980s, he and his business partners were interested in investing in hotel properties to suitably supplement their travel and airways business. In 1988,

Sheldon Adelson and his partners acquired the ownership rights of the well-known Sands Hotel and Casino, Las Vegas for $128 million. He renovated the hotel completely to suit his business interest with a shopping mall, resort and a convention center for company events.

In 1995, he freed himself from the affairs of COMDEX and sold the interface group to a Japanese company, Son Masayoshi’s Softbank Corporation. He went on to build a mighty resort hotel in Venice, Italy named ‘The Venetian.’

Besides his business exploits, Sheldon Adelson is actively involved in various philanthropic activities and generous funding of political parties of America. Originally a Democrat, he switched over his allegiance to the Republicans and backed the presidential campaign of Donald Trump with the single largest donation of five million dollars to any presidential inauguration.

Sheldon Adelson married Sandra during the early 1970s. They adopted three children. The couple divorced in 1988. He married Miriam Farbstein Ochshorn, a reputed medical professional, in 1991 following a blind date in 1989. Miriam has two daughters from her previous marriage to a Tel Aviv physician, Dr. Ariel Ochshorn.

A self-made man, Sheldon Adelson at present is in his mid-80s and is still going strong. His present net worth is around $42.7 billion.