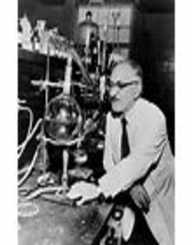 Selman Waksman was a prominent Ukrainian born American biochemist, microbiologist, and inventor. Born on July 22, 1888, he received the Nobel Prize in Physiology or Medicine in 1952, "for his discovery of "streptomycin," the first antibiotic active against tuberculosis." Selman Waksman did extensive research into organic substances especially into organisms in soil, and their decomposition led to the discovery of Streptomycin and other antibiotics. Selman Waksman served four forty years as a professor of biochemistry and microbiology at Rutgers Univers ty and during that period discovered more than twenty antibiotics and developed a procedure, which has been used to develop several other antibiotics.

Later after winning the Nobel Prize, he was accused of it acknowledging the role of Albert Schatz, a Ph.D. student who did the work under Selman Waksman's supervision to discover streptomycin. The funds raised from his patent was used to fund microbiological research that established the Waksman Institute of Microbiology on Rutgers University’s Busch Campus in Piscataway, New Jersey. Selman Waksman was granted an ACS National Chemical Landmark in 2005 for his work in isolating several antibiotics, including streptomycin, the first potent treatment for tuberculosis.

Selman Waksman was born to Fradia and Jacob Waksman on July 22, 1888, in Nova Pryluka Podolia Governorate, Russian Empire currently Vinnytsia Oblast in Ukraine. He left for the United States of America in 1910 that was after having his matriculation diploma from the Fifth Gymnasium in Odessa. Six years in the United States, Selman Waksman became a naturalized citizen. Will there, Selman Waksman enrolled at the Rutgers College, currently Rutgers University, where he graduated with a Bachelor of Science (BSc) in Agriculture in 1915.

Selman Waksman continued to pursue his Master of Science at Rutgers and completed in 1916. During that period, Selman Waksman studied under the supervision of G.J Lipman at the New Jersey Agricultural Experiment Station in Rutgers where he researched into soil bacteriology. Waksman was made a Research Fellow at the University of California, Berkeley and obtained his Doctor of Philosophy (Ph.D.) in Biochemistry there in 1918.

From the University of California, Selman Waksman joined the Department of Biochemistry and Microbiology at Rutgers University. While there, Selman Waksman worked with other researchers to discover antibiotics like streptothricin, actinomycin, clavacin, streptomycin, neomycin, grisein, candicidin, fradicin, candid in and several others. The antibiotics, streptomycin, and neomycin became very effective in the treatment of several infectious diseases. Streptomycin became the first potent drug to be used in the cure of tuberculosis.

Selman Waksman is credited with coining the term antibiotics used to describe compounds obtained from another living organism even though the term was first used in 1871 by a French dermatologist Francois Henry Hallapeau as a description of a substance opposed to the development of life. He also contributed to the anti-fouling paint for the Navy, usage of enzymes in detergents and protecting the French vineyards from fungal infection with the use of Concord grape rootstock.

Selman Waksman had a son Byron Waksman, who was into the research of Multiple sclerosis. Selman Waksman died on August 16, 1973, and was buried at the Crowell Cemetry in Woods Hole, Barnstable County, Massachusetts.

Nobel Prize And Others

In 1952, Selman Waksman received the Nobel Prize in Physiology or Medicine "for his discovery of streptomycin, the first antibiotic effective against tuberculosis." In a citation, Selman Waksman was regarded as "one of the greatest benefactors of mankind," for his discovery of streptomycin. His research student, Albert Schatz who is deemed to have assisted Selman Waksman during the research protested for his efforts being ignored. However, the Nobel committee pronounced that he was just a lab assistant working under an eminent scientist. Waksman used half of his patent royalties to establish the Selman Waksman Foundation for Microbiology in 1951.

He also facilitated the building of the Waksman Institute of Microbiology, a center for the study of microbiology on the Busch campus of Rutgers University in Piscataway, New Jersey. The National Academy of Sciences instituted the award scheme, Selman A. Waksman Award in Microbiology in his honor.

Selman Waksman authored and co-authored more than 400 scientific papers. He also wrote twenty-eight books and fourteen scientific pamphlets. Some of his publications include Enzymes (1926), Humus: origin, chemical composition, and importance in nature (1936, 1938), Principles of Soil Microbiology (1938) and My Life with the Microbes (1954) (an autobiography)