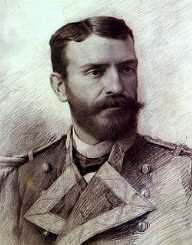 Santiago Ramon y Cajal was a Spanish pathologist and neuroscientist and is known as ‘the father of neuroscience’.

Santiago Ramon y Cajal was born on 1 May 1852 in Navarre, Spain. As a child, Ramon y Cajal was extremely destructive and held authority in contempt. He repeatedly had to move school as his behaviour saw him thrown out by a number of institutes. Ramon y Cajal was imprisoned at age eleven for destroying a neighbour’s garden. Deciding his son was unfit for study, Ramon y Cajal’s father, Justo Ramon, apprenticed him to a barber.

Santiago Ramon y Cajal began his career in medicine in the Spanish Army. He served as a medical officer on an expedition to Cuba on which he contracted both malaria and tuberculosis. Following his recovery Ramon y Cajal received his doctorate in medicine from a university in Madrid. He then took a professorship in Valencia. It was in Valencia that he began his research into the microbiology of the disease cholera. His research centred on the effects on inflammation and of the cells.

Ramon y Cajal moved to Barcelona in 1877. He had been given a professorship University of Barcelona. Here Ramon y Cajal improved upon the Golgi’s method and used it to study the central nervous system. The method involved staining neurons with potassium dichromate and silver nitrate, this made  the cells transparent. Using this method and his love of drawing Ramon y Cajal created a series of detailed sketches of the central nervous system and the regions of the brain.

Santiago Ramon y Cajal described in detail the cells of the neural structures and provided diagrams for his work. The interstitial cell of Cajal was discovered by Ramon y Cajal and named in his honour. The cell was discovered in the intestinal lining and was responsible for the contractions that moved material through the intestinal system. Later in his life Ramon y Cajal become interested in the subject of hypnosis. The work he had done on hypnosis was destroyed during the Spanish Civil War.

Santiago Ramon y Cajal married Silveria Fañanás García in 1879. The couple had seven children together, four daughters and three sons. Two of their children died in infancy. The marriage lasted until Siveria’s death in 1930. Ramon y Cajal died on 18 October 1934 in Madrid.

Santiago Ramon y Cajal won the Nobel Prize for Physiology or Medicine in 1906.