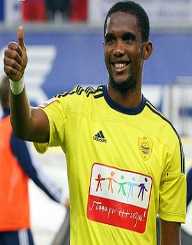 Samuel Eto’o is a Cameroon born football player born on 10 March 1981. He is the most decorated footballer of African origin, having walked away with a record of four African Player of the Year Award. Having played his international football for Cameroon and he won African Cup of Nations in 2000 and 2002. His club football begun at Real Madrid FC, he then signed for Barcelona FC, Mallorca FC, Inter Milan FC and later FCAnzhi Makhachkala FC, Chelsea FC, Everton FC, Sampdoria FC, AntalyasporFC, KonyasporFC winning many trophies. He became the first African footballer to win two European continental trebles with Barcelona and Inter Milan FC.

He began his football career in Kadji sports academy at the age of 11 in 1992. His move to a French club failed since he lacked an identity card but went on to sign for Real Madrid youth team in 1997.

Eto’o made his international debut at the age of 15 on 9 March 1997 against Costa Rica. In 1998 FIFAWorld Cup, he was the youngest participant at the age of 17. During the FIFA world cup on 6 Jun 2002, Eto’o scored a goal on against Saudi Arabia. Cameroon went on to win two African Cup of Nation titles in 2000 and 2002 where Samuel was their key player. He along with Laurent Pakou became the all times African cup of Nations top scorer with 14 goals. On 27 August 2014, he announced his retirement from international football at the age of 33.

His professional career started at Real Madrid as a youth. Real Madrid later loaned him to several football clubs including Leganes FC, Espanyol FC, and Mallorca, where he later signed a permanent deal. The Cameroonian went on to becomeMallorca FC all-time goal scorer with 54 goals. He joined Barcelona in 2004 after his move back to Real Madrid failed. Eto’o finished as the top scorer in 2006 season with 26 goals edging out David Villa of Valencia FC. He later moved to Inter Milan FC where he went on to win SerieA Champions League and Italian cup.

In 2011 FCMakhachkala FC signed him and made him the highest paid player in the world. He moved to Chelsea FC in 2013 – 2014 season on a one year contract. Everton FC signed him on 2015 scoring 4 goals in 20 games where he left only after half a season. Thereafter, he joined Sampdoria FC, AntalyasporFC, where he made little impact. He currently plays for KonyasporFC in Turkey.

Despite Samuel Eto’o’s flourishing career had his flaws. He was fined $12000 for saluting fans singing “Madrid bastards, salute champions” but later apologized to Real Madrid FC which was his childhood club. During his time at Barcelona FC, he refused to come out as a substitute on a league game against Racing de Santander. Cameroon national skipped a game against Algeria on international football where Eto’o was blamed for influencing the team.

Foundation Samuel Eto’o (FSE) is a foundation started and run by Samuel Eto’o. Its aim is to eradicate poverty through sports activities in Cameroon.