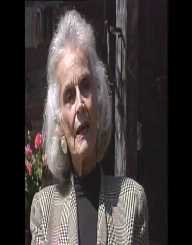 Ruth Graham was born on 10th June 1920, in Qingjiang, Jiangsu, China, to Dr. L. Nelson Bell, and his wife, Virginia McCue Bell. Graham’s parents were missionaries, working at the Presbyterian Hospital in China as medical staff.

Ruth Graham was one of five children. Her siblings included Rosa, Clayton, and Virginia.

Ruth Graham and her siblings were home-schooled, but when she turned 13 she was enrolled into high school in Pyongyang, Korea, where she studied for three years. The family returned to Montreat, North Carolina, in the U.S., where her parents took a break. Upon returning to the U.S., she completed her high school education.

She then went to Wheaton College in Illinois, which is a Christian-based college. She graduated with her degree, and it was whilst at Wheaton College that she met Billy Graham, who was to become her husband.

Ruth Graham largely was the backbone and support for her husband, Billy, as he became a traveling evangelist for Youth for Christ. Billy would often confer with Graham about decisions that needed to be made in the ministry.

Her first book was published in 1959, called, Our Christmas Story, for children. Ruth Graham went on to author over a dozen books, some stories, others, poetry. She also co-authored several books with her daughter, Gigi.

Ruth Graham’s biography was written by Patricia Cornwell. It was originally called, A Time for Remembering, but was later reissued under the title, Ruth: A Portrait.

1996:   Ruth Graham and her husband, Billy, were jointly awarded the Congressional Gold Medal

Ruth Graham married Billy Graham in 1943 after they met in college. They were still a devoted couple when Ruth Graham passed away from illness in 2007.

The couple had five children, Franklin, Anne, Gigi, Ned, and Ruth. They also have several grandchildren and great-grandchildren.

Ruth Graham was a staunch supporter of her husband’s evangelical work. When they first married, he was a pastor in a local church for a short while, but then joined Youth for Christ and began his evangelical work.

The couple also moved from Illinois to Montreat, North Carolina, so that Graham could be near her family while her husband was traveling.

Her husband Billy became the most well-known evangelist in the world. He conducted crusades the world over. Even though he was Baptist, Ruth Graham remained true to her upbringing and stayed a Presbyterian.

Ruth Graham founded the Ruth and Billy Graham Children’s Health Center in Asheville, North Carolina, in 1966. She was still actively involved with the Center right up to her death.