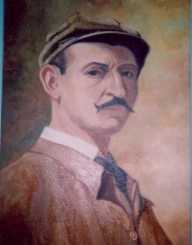 Born on December 11, 1857, Rodolfo Amoedo was a famous Brazilian painter, designer, and decorator. He was one of the painters who influenced the reintroduction of the teaching and learning of aesthetics at the National School of Fine Arts (Enba). Despite being conservative, I style,  Rodolfo Amoedo also contributed immensely to the development of academic art to new artistic movement, leading to the end of the Neoclassical and Romantic movements, which was dominant in Brazil in that period.  Rodolfo Amoedo was very innovative but was quick to defend the old standards. Some of his works include Abel’s Offering (1878), Sulking Woman (Amanda), 1882 and Jesus In Capernaum (Jesus emKafarnaum), 1885.

Rodolfo Amoedo was born on December 11, 1857. However, his place of birth has been in contention. While some claim he was born in Salvador, others presume he born on Rio de Janeiro. Nonetheless, there is substantial evidence that  Rodolfo Amoedo spent some of his childhood life in Salvador. Accounts by art historian Quirino Campofiorito reveals, Amoedo parents were actors and had a difficult upbringing. In 1868,  Rodolfo Amoedo left for Rio de Janeiro where he attended Pedro II College but later dropped out of school which some suggest it was due to inadequate funds.  Rodolfo Amoedo developed ani nterest in decoration as he was invited by a family friend to assist in working in the now-defunct Teatro São Pedro.

Rodolfo Amoedo then enrolled at the "Liceu de Artes e Ofícios do Rio de Janeiro" in 1873, where he studied with Victor Meirelles who also served as his mentor. Amoedo had a transfer to the Academia Imperial de Belas Artes the following year. While there,  Rodolfo Amoedo studied under teachers including the sculptor Francisco Manuel Chaves Pinheiro, Agostinho Jose de Mota and Joao Zeferino de Costa. Amoedo did several works around this time and in 1878 his paintwork, Sacrifice of Abel, almost won him theAiba’s travel fellowship from the Brazilian Academy to study in Europe. He was, however, able to win the fellowship in 1879, which allowed him to live and study in Paris until 1887.

There, he initially enrolled at the Acedemie Julian and later moved to the Ecole des Beaux-art in 1880. He received tutoring and guidance from Paul Baudry, Alexandre Cabenel, and Puvis de Chavannes.  Rodolfo Amoedo studied the use of discreet colors in making artworks. Amoedo took part in the Salon from 1882 to 1884 during a time he was developing what became his main themes for Biblical sceneerio, Indianismo, and mythology. Some of his artworks and paintings during this time were ‘Woman’s Back’ (1881), ‘Marabá’ (1882), ‘Sulking Woman’ (1882), ‘The Last Tamoyo’ (1883), ‘The Departure of Jacob’ (1884) and ‘Jesus in Capernaum’ (1885).In 1888, he returned to Rio de Janeiro and was appointed as an Honorary Professor at Aiba and taught at the Escola Politecnica. He also held and participated in exhibitions winning a gold medal at the "Exposição Nacional Comemorativa do 1º Centenário da Abertura dos Portos do Brasil" in 1908.

Rodolfo Amoedo became a Professor at the Escola Nacional de Belas Artes during which he entreated his students to explore other painting processes including watercolor, tempera, and encaustic. Amoedo served as the Vice-Director and Acting Director on several occasions of the school on several occasions. In 1909, he painted panels in the Supremo Tribunal Federal and the Biblioteca Nacional, and Theatro Municipal do Rio de Janeiro in 1916. In 1918, he became the Second Chair at the School of Painting, holding the position until 1934. Rodolfo Amoedo died on May 31, 1941.

Rodolfo Amoedo won an award from the Brazilian Academy in 1878. He received the Aiba’s foreign travel prize for ‘Sacrificio de Abel’ (The Sacrifice of Abel), which enabled him to travel to Paris from 1879 to 1887.