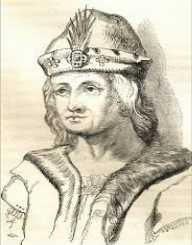 Robert II of Scotland was born in March 2, 1316 in Paisley Abbey in Renfrewshire. He was born to Walter Stewart and Marjorie Bruce. His mother died after he was born due to childbirth complications. He lost his father in 1326. His father was buried in Paisley Abbey.

Robert II of Scotland married two wives. He first married Elizabeth Mure and then his second wife, Euphemia de Ross. He had fifteen children from his marriages. He holds the record of having more children than any King of Scotland who has ever lived. By his wife Elizabeth he had the following children: John, Earl of Carrick, Margaret Stewart, Alexander, Earl of Buchan ‘The Wolf of Badenoch’, Walter Stewart, Robert, Earl of Albany, Marjorie Stewart, Jean Stewart, Isabel Stewart, Katharine Stewart, and Elizabeth Stewart.