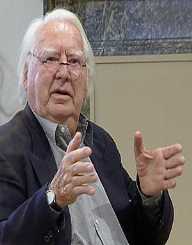 Richard Alan Meier was born on October 12, 1934. He is an American architect. He is also an abstract artist. His works are noted for their geometric patterns, rich spatial exposures with an emphasis on light and dominance of the use of white colour that gives the structure a pristine look.

Richard Alan Meier was born on October 12, 1934, in Newark, New Jersey. He was born to Jerome Meier and Carolyn Katlenbacher. He was brought up alongside two brothers. He attended Columbia High School. In 1957, he completed his Bachelor in Architecture from Cornell University in Ithaca, New York. After graduation, he travelled to many countries including Italy, France, Israel, Greece, Denmark and Germany in search of connections with other architects.

In 1959, Richard Alan Meier returned to New York where he joined Skidmore, Owings, and Merill where he worked for some time. He later worked with Marcel Breuer who was an architect. He worked during the day as an architect, and at night he would direct his energy to abstract expressionist paintings. He shared a studio with painter Frank Stella. In 1963, he established his office in New York. He also started teaching at the Cooper Union. He became popular with his works ‘Smith House’ in Darien and ‘Douglas House’ in Harbor Spring, Michigan.

In 1972, the book ‘Five Architects’ was published after his interactions with the Conference of Architects for the Study of the Environment. Richard Alan Meier was a member of the New York Five which was a modernist architects group. His other works include ‘Indiana: The High Museum of Art’ in Atlanta, Georgia and ‘The Atheneum’ in New Harmony. He received commissions such as museums, city halls, private residences, government offices and cultural facilities among other commissions.

Richard Alan Meier founded the ‘Richard Meier and Partners’ which is a renowned brand in the field of architecture currently. His other works include ‘City Hall and Central Library’ in the Hague, Netherlands, ‘Getty Center’ in Los Angeles, California, ‘West Village’ in Manhattan, ‘Weill Hall’ in Ithaca and ‘City Tower’ in Prague, the Czech Republic among other works that are attributed to him. He is a member of the Board of Trustees in organizations such as ‘The American Academy of Arts and Letters’ among other organizations. He is also a member of the Board of Directors in institutes such as American Academy of Arts and Sciences, Cornell University Alumni Council and Belgian Royal Academy of Art among many other institutes.

In 1948, Richard Alan Meier received the Pritzker Prize. In 2013, he received the A+ Lifetime Achievement Award.

Richard Alan Meier married architect Katherine Gormley with whom they had three children, Ana Meier and Joseph Meier. The couple divorced later on.