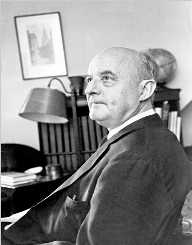 Born on June 21st, 1892, Reinhold Niebuhr rose to become a celebrated theologian. He was also an intellectual in the field of ethics and was most admired for the ideologies he had with regards to politics. He also spent many years working at Union Theological Seminary as the professor. In 1964, he was bestowed with a Presidential Medal of Freedom for his intellectual contributions.

Reinhold Niebuhr was born on June 21st, 1892. His place of birth was in Wright City, Missouri. His father was called Gustav Niebuhr while his mother went by the name Lydia. Both his parents were German immigrants. Through his father’s religious inclination, Niebuhr and his siblings developed interests in the field of theology. Later on, his brother named H. Richard Niebuhr also rose to become a renowned theological ethicist. Hulda Niebuhr, their sister, also took the same religious direction as she later became a professor of divinity.

With time, in 1902 the entire family shifted to Lincoln, Illinois. During this time, Niebuhr’s father had been given the responsibility of taking over as the German Evangelical Synod church’s pastor. While in Illinois, Reinhold Niebuhr enrolled at Elmhurst College where he later graduated in 1910. He moved on to study at Eden Theological Seminary situated in Missouri. In 1914, he earned his divinity degree from Yale Divinity School. After pursuing his further studies for a full year, he obtained his master’s degree in arts.

The same year Reinhold Niebuhr graduated with a Master of Arts; he was also ordained to take on pastoral responsibilities. This was followed by his first mission in Detroit that was assigned to him by mission board he was serving. Upon his arrival, it was evident that Niebuhr could easily connect with people. This is because the congregation increased in numbers over the short period that he had begun preaching.

Reinhold Niebuhr also gained high acclaim during World War I. His advice to the German-Americans was that they should show patriotism to the Americans. His comments were usually published in national magazines and thereby brought fame to his end. Around this time, he also took the responsibility of an Executive Secretary of the War Welfare Commission. He continued with his pastoral duties in Detroit while serving this position.

In 1928, Niebuhr migrated to the New York City. Here he showed full dedication to Marxism. The same year, he took the role of a professor at Union Theological Seminary. He was to tutor on Practical Theology. He spent a considerable portion of his career working as a professor before finally retiring in 1960. His intellectual perceptions influenced many students from one generation to the other. Dietrich Bonhoeffer, a church minister, was one among those that were greatly influenced by Niebuhr intellectual ideologies.

During the late stages of his career, Reinhold Niebuhr took the job as a magazine editor. This was from 1941 to 1966 where he edited Christianity and Crisis magazine. There are also notable publications that he made including Moral Man and Immoral Society, The Nature and Destiny of Man and The Irony of American History.

Reinhold Niebuhr wedded Ursula Keppel-Compton in 1931. She had been studying theology at the Oxford University. Together, they were blessed with two children namely Christopher and Elizabeth.