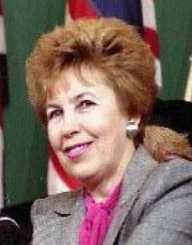 Raisa Gorbacheva was the first and last Soviet First Lady she is best known as the wife of the Soviet leader Mikhail Gorbachev.

Raisa Gorbacheva was born on 5 January 1932 in Rubtsovsk, Siberia in the Soviet Union. Her parents were Maxim AndreyevichTitarenko and Alexandra PetrovnaParada. Her father worked as a railway construction engineer. The family moved frequently, but Gorbacheva spent the majority of her childhood in the region around the Ural Mountains. She was an excellent student and received a gold medal for her performance in secondary school. This allowed her to bypass University entrance exams. Instead, she enrolled in Moscow State University.

Gorbacheva was studying the effects of collectivization on the lives of the peasant farmers. She carried out extensive surveys personally and the information obtained was used by Mikhail to improve local agriculture.

In 1985, Mikhail Gorbachev became the General Secretary of the Central Committee of the Communist Party of the Soviet Union. Raisa Gorbacheva left her job at the Moscow State University after this. Gorbacheva now devoted herself to supporting her husband and patronizing charities and public works. In 1986 she began the Soviet Cultural Foundation. The Foundation sought the preservation of Soviet culture and artifacts. While President Gorbacheva oversaw the retrieval of more than fifty thousand pieces of artifacts and works of art that had been lost during the Russian Revolutions and Civil War.

Raisa Gorbacheva also worked with children’s charities that attempted to treat victims of the Chernobyl disaster and cancer. Gorbacheva was a novelty in Russia as the wives of politicians rarely made public appearances. In 1990 she was granted the title First Lady of the Soviet Union. She gave a speech along with her American counterpart, Barbara Bush, to the graduating class of Wellesley College in Boston in 1990. With the attempted hard-line coup in 1991 and Boris Yeltsin succeeding her husband Gorbacheva was largely kept out of the public eye. The 1991 attempted coup shook her.

Raisa Gorbacheva, together with her husband, Mikhail Gorbachev, had one daughter Irina. After her husband left office and the collapse of the Soviet Union, Gorbachev founded the Gorbachev Foundation to work on easing social, economic and political problems in Russia. Her Raisa Gorbachev Foundation also worked to battle children’s blood cancer. In 1999, she was diagnosed with leukemia and went to Germany for treatment. It was in Munster, Germany that she died on 20 September 1999.