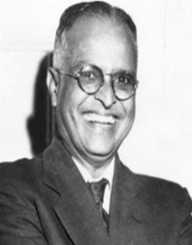 R. K. Narayan is considered the most prolific English novel writer from the Indian subcontinent.

R. K. Narayan, full name Rasipuram Krishnaswami Ayyar Narayanswami was born on October 10, 1906, in Madras, India. He was the son of a school teacher. Narayan stayed with his grandmother as opposed to his father who was constantly transferred from one school to another. He learned his native Tamil, English, and arithmetic from his grandmother.

He went to Christian run schools in Madras or present-day Chennai. Narayan went to Lutheran Mission School and later Christian College High School. He relocated with his family from Chennai to Mysore to live with his father. After completing his high school education, Narayan enrolled at the Maharaja University of Mysore. He graduated and became a teacher in Mysore.

Narayan became interested in English literature as a child. He developed a reading habit which was uncommon to his peers. He advanced his reading habit in Mysore. He frequently visited the Maharaja High School library, where his father was the head teacher. Narayan got exposed to the most respected English literary authors of the day.

Narayan resigned from his teaching job to pursue his passion for writing novels. His family members immensely supported him. Narayan started his long writing career at home. In 1930, Narayan finished his first novel titled Swami and Friends. Like many new writers, he was rejected by most publishers.

After the initial setback, he got employed as a journalist and worked for the daily newspaper The Justice. He contacted a friend in Oxford who offered to help him get a publisher. Narayan sent his manuscript to London which was given to the author and publisher Graham Greene. The book was published in London in 1935. In the book, Narayan created a story around the fictional city of Malgudi.

In 1937, he published his second book titled The Bachelors of Arts. He narrated his experiences as a college student in Mysore. Graham Greene encouraged him to start focusing on the wider English speaking global audience in his future books. In 1938, Narayan published his third novel keeping the advice of Greene in progress. The novel titled The Dark Room was centered on emotional violence and abuse in marriages. Narayan was praised by the literary world for his in-depth insight.

Narayan lost his young wife Rajam in 1939 due to tropical typhoid. He braved the rest of the year in seclusion mourning his departed wife. At the fall of the year, he published his fourth book The English Teacher. In the book, he gives a biography of his life and the influence of his departed wife.

Narayan became an established English story writer. In the following years, he published notable books. Some of the books included Mr. Sampath which was published in 1949. In 1951, he published the financial Expert, followed by the 1955 book titled Waiting for the Mahatma. In 1956, he toured the United States and published The Guide. Narayan was nominated for a literary award for the first time. He won the Sahitya Award.

On his return to India, he published the novel The Man-Eater of Malgudi in 1961. He embarked on another literary tour of Australia and the US. During the tour, he lectured the audiences on the Indian literary culture. Narayan returned to India and started writing columns for newspapers. He wrote for the Tamil based The Hindu, and English based The Atlantic newspapers.

Narayan departed for his norm in 1964. He wrote a collection of stories in the mythological book titled Gods, Demons and Others. He returned to his former self the following year. In 1967, he wrote the novel The Vendor of Sweets. He was honored by the University of Leeds with an honorary doctorate degree.

In the 1980s, Narayan published a host of novels. He continued with his fictional story in Malgudi Days published in 1982. The following year, he wrote Under the Banyan Tree and Other Stories. He published Talkative Man in 1986, and in 1987, he wrote A Writer’s Nightmare. He continued writing in the 1990s with books like The World of Nagaraj published in 1990, and the 1992 book Grandmother’s Tale.

Apart from writing novels, Narayan was commissioned by the regional Karnataka administration to publish a tourism journal on the state in 1980. He served as a member of the Indian legislature from 1980 to 1986.

Narayan was honored by several institutions. He was nominated for the Nobel Prize for Literature on several occasions. He received the Padma Bhushan Award in 1964. In 1980, he received the AC Benson Medal from the British Royal Society of Literature.

Narayan married Rajam in 1935. Rajam was 15 years. She died of typhoid in 1939. Narayan mourned his wife for years. He never remarried. He raised his daughter with the help of the extended family.

R. K. Narayan died in 2001, aged 94. He is celebrated as one of the authors who exposed the Indian culture to the world. He used fiction to express the Indian stories to the English speaking world.