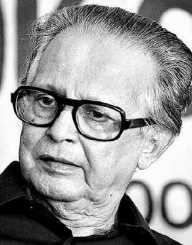 R. K. Laxman was born on October 24, 1921. He was an Indian cartoonist. He created the comic strip ‘You Said It’ which featured ‘Common Man.’ He represented the average Indian.

Rasipuram Krishnaswamy Laxman was born on October 24, 1921, in India. He was born to a father who was a headmaster. He was brought up alongside six siblings. He received the art of drawing from a young age. In his early years, he drew caricatures of his father and those of his teachers. He was inspired by the works of the cartoonist Sir David Low. He father suffered a stroke while he was still young and he died. He was brought up by his extended family.

R. K. Laxman applied for J. J School of Art in Bombay, but he was rejected. He did not have the talent that would guarantee his entry into the school. He later attended the University of Mysore. He graduated from the University with a Bachelor of Arts Degree.

After graduation, R. K. Laxman contributed illustrations and cartoons to Swarajya. He was involved in drawing the pictures of the mythological character ‘Narad’ for a film at the film unit at Gemini Studios, Madras. He later shifted to Bombay where he began working for the weekly ‘Blitz.’ Blitz was owned by R.K Karanjia. He later became famous as a cartoonist. In 1946, he became a political cartoonist at the Free Press Journal. While working with the journal he met cartoonist Bal Thackeray. He worked hard, but he later left the publication due to ideological differences with the management.

In 1947, R. K. Laxman started working at The Times of India. He contributed illustrations for the Illustrated Weekly of India. He also contributed comic strips for children’s magazine. As time went by his political cartoons started appearing on the front page of The Times of India. His popularity grew as a cartoonist, and he became the publication’s chief political cartoonist. At the paper, he came up with the idea for the cartoon strip known as ‘You Said It.’  The strip featured the ‘Common Man.’ He also wrote novels such as ‘The Messenger,’ and ‘The Hotel Riviera.’ In 2003, ‘The Distorted Mirror’ was published. The book is a collection of his short stories, articles, and essays.

In 1984, R. K. Laxman received The Ramon Magsaysay Award in the category Journalism, Literature and the Creative Communication Arts. In 2005, he received the Padma Vibhushan.

R. K. Laxman first married dancer and actress Kumari Kamala before the marriage ended in divorce. He later married Kamala who wrote books for his children. He passed away on January 26, 2015, in Pune. He died of a stroke. He died at the age of ninety four.