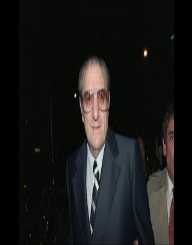 Paul Castellano was born on June 26, 1915, in Brooklyn, New York. His father was a butcher and a member of Mangano crime family. Castellano dropped out of school in 8th grade to learn butchery from his father, as well as collecting numbers game receipts.

Castellano was first arrested in 1934 for robbing a haberdasher in Hartford, Connecticut. He refused to identify his accomplices and served a 3-month prison sentence. His actions earned him a reputation for mob loyalty. In 1937 Castellano married Nina Manno, and the couple had three sons. He was also known for his big size- 190cm tall and weighing 120 kg.

In the 1940s, Castellano joined the Mangano family and became a capo under the successor of Vince Mangano, Albert Anastasia. Anastasia was later murdered, and Carl Gambino became the boss. In 1957, Castellano attended the Apalachin Conference in Apalachin, New York. The police and Castellano raided the meeting was one of the 60 high-ranking mob members arrested. He refused to give out any information about the meeting and was sentenced to a year in prison on contempt charges. In 1960, he was sentenced to 5 years in prison for conspiracy to withhold information, but an appeals court reversed his conviction.

In 1975 Castellano allegedly ordered the murder of Vito Borelli, because he compared Castellano to Frank Perdue, the commercial spokesman for Perdue Farms. Castellano considered this an insult and Borelli was killed. The same year, Castellano became the acting boss, since Gambino was aging.

As the acting boss, Castellano took over several non-legitimate businesses and converted them to legal enterprises. He launched Dial Poultry that supplied 300 butchers in New York, but he used intimidation tactics to sell his product. He also started to make a lot of money from the concrete business. His son Philip was the president of Scara-Mix Concrete. The business supplied Staten Island with construction concrete. Castellano also formed the Concrete Club-a group of mob families that divided revenue from New York developers.

In 1976, Carl Gambino died at his home. Before his death, he appointed Castellano to succeed him over the underboss AnielloDellacroce. Dellacroce was at the time imprisoned and could not contest Castellanos succession, but he remained the underboss. Despite these conditions, the Gambino family split into two rival factions.

In 1978, Castellano ordered several murders, including one of Gambino’s associates Nicholas Scibetta and Gambino Capo James Eppolito and his son. The same year he agreed with the Westies gang from Hell’s Kitchen. Castellano got a hitman with no direct ties to Gambino family and Westies were protected by Gambino’s.

Castellanos height of power was during the early 1980s. During this time he built a 17-room mansion in TodtHil, Staten Island. The house had Carra marble, English garden, and an Olympic size swimming pool. He was having an affair with the live-in maid Gloria Olarte. He spent most of the time at the mansion and led his business from the comfort of his home.

The Gambino family often resented the lavish lifestyle of Castellano. Castellano also started to ask for 15% of capost earnings, instead of the usual 10%.

Castellano ordered the murder of Roy DeMeo, which he doubted to be loyal in the upcoming trial for car theft. In 1983, FBI got an order to install listening devices in Castellano’s house, which provided a lot of information incriminating Castellano. The following year, Castellano was charged on federal racketeering charges, extortion, narcotics trafficking, theft, and prostitution. The bail was set at $2 million. In 1985 he was again arrested along with several other mafia bosses on charges of racketeering. This time he was released on $3 million-dollar bail.

Dellacroce died on December 2, 1985, which led to a series of events resulting in the assassination of Castellano 14 days later. Castellano did not attend Dellacroce’s wake, which insulted his family. At the same time, he also indicated breaking up with long-time associates Gotti’s crew. Government surveillance tapes featuring Angelo Ruggiero discussing heroin trafficking were released to Ruggiero’s attorney. Castellano demanded these tapes, which would also provide information on Gotti’s involvement, giving enough reason for Castellano to kill him. Gotti assembled a group of conspirators and planned Castellanos assassination.

On December 16, 1985, Castellano went to a meeting with Bilotti at the Sparks Steak House in Manhattan. As Castellano was getting out of his car, he was shot in the head and also Bilotti. Gotti was observing the scene from the opposite side of the street.

Castellano was buried in a Staten Island cemetery. Due to his notorious criminal life and death, the Roman Catholic Archdiocese refused to grant Castellano a Catholic funeral.

Two weeks after Castellanos death, Gotti was elected as the new boss of Gambino’s. Vincent Gigante, the boss of Genovese crime family, was also planning the assassination of Gotti since he never received permission for Castellanos murder. In 1992, a car bomb meant for Gotti exploded outside his social club. Afterward, Gotti and Gigante called a truce. The same year, Gotti was convicted of racketeering charges, including the murder of Castellano, and was sentenced to life in federal prison. Gotti died at the prison in 2002. Besides him, no one else was ever charged with the murder of Castellano.