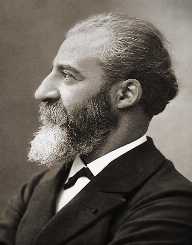 Otto Wallach’s father was a resident of the Prussian town of Konigsberg. This is where Otto was born on 27th March 1847. His family became Lutherans after conversion from Judaism. His father reached such heights in public service and rose to the position of Auditor General while working in Potsdam. His family, however, moved to Potsdam from Stettin after moving there from Konigsberg after Otto was born. Otto started school at the humanistic Gymnasium in Potsdam although there were hardly subjects taken in the sciences. While schooling here, Otto took classes in the Arts, incorporating literature and history.

Otto Wallach was however self-taught in the sciences and chemistry. By the time he was due for the university; Otto Wallach had proceeded to the University of Gottingen in 1865 but soon left for Berlin. He served as understudy to G. Magnus and A.W. Hoffman but only waited for a semester before returning to Gottingen. Otto was awarded a doctorate after research and studies for five semesters.

When1870 dawned, Otto Wallach was due for military service, and this was during the war with France in which they were pitted against the Prussians. When the war ended, Otto made his way back to work in a production firm. However, the chemicals that littered the premises were hazardous to Otto’s fragile health, and he had to resign. Otto found himself again in the academic environment when he relocated to the University of Boon from Berlin. This was in 1872, and Otto persevered and immersed himself in research here for the next decade. He became a Professor Extraordinary after four years, and this was a testament to his scholarly contributions. When the school’s Pharmacology Chair became vacant in 1879, Otto he was obligated to fill the void. This led to his specialization in the field of pharmacology. This was how he uncovered reaction of phosphorus pentachloride when exposed to acid amides. Otto's innovation led to the discovery of imino chloride.

Otto Wallach's focus on a few abandoned bottles left in the research cupboard which contained essential oils was how he chanced upon a new field of work. He immersed himself in researching these over the next decade, and it became his focal work of research. Otto's commitment and research were exemplary, and he exuded distinction as an outcome.

The first published work ofOtto Wallach was in the year 1884 and it zeroed-in on the array of C10H16 and what comprised these. By 1889, he was the Director of Gottingen Chemical Institute and over the next foreseeable years, he researched alicyclic compounds. The depth of work he carried out included the particulate nature and profound character of the alicyclic compounds. This focal point also extended to hydrogen chloride, and he delved scrupulously into the very nature of the molecules found in essential oils. Otto uncovered Terpenes, which were fragrant elements in the course of this research.

The research efforts of Otto were cemented with regards to the Terpenes by the year 1909. Otto’s works got published with the outcomes and conclusions of his extensive research which he titled “Terpene und Campher.” This groundbreaking line of work was the forerunner of the deepened industry of fragrant smells that evolved down the years to modern day. Otto left off the research field in the year 1915 so that others can continue from there.

Another line of work carried out by Otto Wallach in his research efforts included the process of arriving at dichloroacetic acid when chloral is converted. He also forayed into dyes such as the azo and diazo compounds. Otto Wallach's pattern of work was likened to that of renowned researchers like Adolf von Baeyer and Emil Fischer; He was careful to examine practical experiments than getting infatuated with theoretical postulations. It was on the score of his efforts that he ended up as Chair of Wohler in the Gottingen Chemical Institute.

Otto Wallach's remarkable distillation of essential oils led him to the conclusion that the molecular structure they had pointed to similar physical properties. He surmised that all essential oils are very innately similar and interchangeable.
The sum of 15 years was what it took him as he researched the terpene family. He came up with his conclusions after that, and the world took note of his scholarly contributions.

The rule of organic chemistry known as Wallach’s Rule was named after him and this states that “racemic crystals tend to be denser than their chiral counterparts.” Other terms such as the Wallach Rearrangement, Leuckart-Wallach reaction and the Wallach Degradation, all immortalize his work. Otto Wallach got global recognition in the year 1910 when he was shortlisted by the Alfred Nobel Foundation as the winner of the year’s Nobel Prize for Chemistry. His research into the component of dyes of aniline nature is widely recognized, and he is seen as the pioneer figure in the field of organic chemistry.

Otto also got awarded by the Chemical Society in 1908 with an Honorary Fellowship. This was in addition to an Honorary Doctorate by the University of Manchester. He also bagged similar doctorates from Technological Institute of Braunschweig and the University of Leipzig. The Verein Deutscher Chemiker also made him an Honorary Member in 1912. This was in addition to the Royal Order of the Crown award given to him in 1915. He was earlier awarded in 1912 with the Davy Medal in the Gold and Silver category.

Otto Wallach was largely associated with his siblings and colleagues. He did not marry in his lifetime.