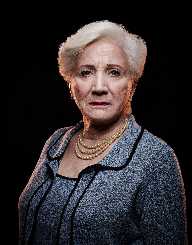 Olympia Dukakis is an award-winning American actress of Greek heritage, famous for her role in the movie Moonstruck.

Olympia Dukakis was born on June 20 1931in Lowell, Massachusetts to Greek American parents. Her parents were Constantine and Alexandra Dukakis, immigrants from Greece. She is one of the two siblings in her family. She has a younger brother called Apollo.

Dukakis started her acting career at the Broadway in 1961. She appeared in her maiden play The Aspern Papers in 1961. Dukakis got a role in the 1962 play A Man’s a Man. She acted in the 1964 play, Abraham Cochrane. She did other notable plays like The Cherry Orchard, The Rose Tattoo, The Seagull, and The Marriage of Bette and Boo. A decade later she appeared in another well-acclaimed play Who’s Who in Hell.

In 2002 she voiced the character of Zelda in the comic production The Simpsons. In 2004 she started doing the role of Marge Barnett in the Center of the Universe, a CBS production. She left the series in 2005. Dukakis did another commercially successful series Sex & Violence. The series ran from 2013 to 2015.

In 1995 she played a leading role in the film Mr. Holland’s Opus. The film is based on a story of a high school tutor from a broken family trying to make it by composing songs. In the production Mafia, she acted alongside Christina Applegate. In 2003 Dukakis played the role of Lila.

She continued getting leading roles in the films like Thing About My Folks, and Away from Her. In 2011 Dukakis also cast in the lesbian-themed film Cloudburst.

She got her firsthand experience as a producer in the film Montana Amazon. She became part of the acting crew and the executive producer. Other films she appeared in are Steel Magnolias done in 1989, Dad released in 1989, The Cemetery Club produced in 1993, and Mother produced in 1995. She recently appeared in Montana Amazon, A Little Game done in 2013, and the 2016 films Infiltrator, Broken Links, and Change in the Air.

In her film acting career, Dukakis almost entirely plays the roles of women who seek identity in various confusing situations.

Dukakis got married to Louis Zorich on November 30, 1962. She became a widow on 30 January 2018 upon the death of Zorich. She had three children with Zorich. These are Christina, Louis, and Stefan. Dukakis lives with some of her family members in New York.

On social issues, Dukakis is a champion of progressive rights of women and the conservation of the environment. She works with organizations in raising awareness of crippling diseases like Alzheimer’s and osteoporosis.

Olympia Dukakis is still involved in film and acting. She is a celebrity honored with a Star at the Hollywood Walk of Fame. She is a recipient of awards in both stage and film acting.