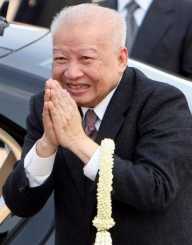 Norodom Sihanouk was born on October 31st, 1922. His place of birth was in Cambodia. Sihanouk earned his fame for being the King of Cambodia for two times. His first tenure came in 1941 to 1955. He took over as the king again in 1993 to 2004. Surprisingly, he took over as the king for the first time when he was just 19 years old. After Sihanouk ruled for 14 years during his first tenure, he abdicated the throne prompting his father Suramarit to take over.

After the death of his father, Sihanouk was back at the prime minister’s office. For five years, Lon Nol, the military general was in charge of the office. Working with Khmer Rouge political party, he managed to win back his kingdom. Unfortunately, Sihanouk was considered as a puppet to Pol Pot who was the communist leader. The Vietnamese army soon removed Pol Pot from office leaving Sihanouk to struggle on his own. He later passed away on October 15th, 2012 at the age of 89.

Norodom Sihanouk was born on October 31st, 1922. He was the only child of SisowathKossamak and Norodom Suramarit. He went for his early education in Phnom Penh city. Shortly after he enrolled with 'Lycée Chasseloup Laubat' which was situated in Ho Chi Minh City. After schooling, he went for his military training at Armoured Cavalry Branch Training School.

On April 25th, 1941, Sihanouk rose to the throne becoming the King of Cambodia at a tender age of 19 years. This occurred after King SisowathMonivong; his grandfather passed on. Four years into his administration, the Japanese empire defeated the French administration. This occurred on March 9th, 1945. This was followed by demands to declare the nation’s independence. Sihanouk was obliged to do this, and he has crowed the prime minister in nine day’s time. A few months later, Japanese invaders came in and claimed that Son Ngoc Thanh was their prime minister. Thanh served in the office for only two months.

During the 1950s, Sihanouk took his charge as the prime minister from YemSambaur. During this time, he only served for a month, but after two years he reigned for a long period. In late 1953, Cambodia finally gained their highly coveted independence from their colonists France. This was the beginning of his reign as the King of Cambodia. Two years later, the king established his political party called SangkumReastrNiyum. During the same year, he stepped down from his throne leaving his father to take over as the king.

Sooner or later, after becoming the prime minister, Sihanouk later took over as the head of state during the elections carried out in 1960. This was moments after his father had died. Sihanouk altered the constitution in a manner that would ensure he served in office till the time of his death. Five years later, Sihanouk signed a treaty that would market his nation’s rice at a high price. The treaty was to allow China and Vietnam to carry out their military transactions within Cambodia. In response, China would purchase Cambodian rice at higher prices.

While serving as the king, Sihanouk is also to be remembered for being in favor of communism and advocating for Maoism in his ruling tenure. Additionally, he had close ties with the North Korean ruler called Kim Il-sung. Both leaders were against the foreign policies that had been adopted by the United States particularly in Asia. The political party that the king had formed earlier on got disbanded in 1970.

Still in 1970, when the king had gone for a trip to Moscow in Russia, the National Assembly worked with the military general called Lon Nol to take over the ruling of Cambodia. This prompted the king to flee to China.

While seeking refuge in Beijing China, the former ruler formed another political party called Khmer Rouge. One of the main goals of this party was to end the military ruling of Cambodia under Lon Nol. This worked as it did not take time before Lon Nol was overthrown. Sihanouk regained his post as the head of state. He continued ruling until 2004 where he gave up his throne.

Regardless of the fact that Sihanouk had some wives, he had legally been married first to Princess Samdech Norleak and later to Paule Monique Izzi. Both marriages occurred in the same year in 1955. His son called Sihamoni from the relationship he had with Izzi later took over as the king of Cambodia.