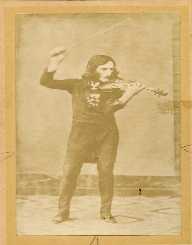 Niccolo Paganini was born to the family of Teresa and Antonio Paganini on the 27th  October 1782 in the Italian coastal district of Genoa. Niccolo had five other siblings, and he was the third among them. Niccolo Paganini's father was a shipping magnate who also had a proven dexterity in playing the mandolin. While Niccolo was still very young, his father led him on violin lessons so that he could up the ante and become a master of the violin. Beyond the home lessons, Antonio Paganini sent his son to some of the best tutors in the field of music in the then Genoa. This was to exemplify the commitment his parents had to see him emerge as a genius of this field of music.

Niccolo had his first performance in church before a live audience in May 1794, and this was recorded. This was undoubtedly a high for the teenager at that time, and Niccolo had his sights on the nadir of the music excellence nay violin mastery. Not long after his teenage performances, Niccolo Paganini was sent to Parma to undergo tutelage under Alexandro Rolla. While here, he had sufficient display of his innate and learned abilities before his tutor. This led him to be steered towards the composition of music and not just the performance. Niccolo showed a noticeable adept knowledge in this regard.

Niccolo Paganini returned to Genoa after his training and was often on tours with his father. Niccolo was in Lucca in the year 1801 for a performance during the Santa Croce Festival. Niccolo dazzled the crowd, and his performance was a grand success. Niccolo Paganini also showed his human weaknesses early by indulging in drinking escapades and womanizing. Niccolo was also noted to have a soft spot for gambling and all the ills led to an early breakdown in his professional aspirations.

After his successful treatment from his addictions and meltdown, Niccolo made his way back to Lucca. He was able to entice one of Napoleon Bonaparte’s sisters named Princess Elisa. This led to Niccolo emerging as the violinist in the court of the Emperor.

As the years rolled by, Niccolo Paganini returned to Genoa and Parma, which were his known turfs. He had series of concerts around these places, and Niccolo's reputation got a noticeable boost. He performed in 1813 at La Scala with such resounding success. Niccolo Paganini's forays were primarily concentrated in Italy at the time was not known in the rest of Europe. He decided to break this limitation and began a Europe-wide tour in 1828 and in August. Niccolo's string of traveling performances took him to leading destinations such as Poland, Britain, Paris Bohemia, Germany as well as Strasbourg. Niccolo's tours were perpetuated till he ended them in the year 1831.

Niccolo Paganini's reputation was solid, and his displays were such that were vaunted. He got massive acclaim for his stagecraft with such rounded assent. Niccolo was not one who thought of himself as living on an Island as he acknowledged such known names like Giovanni Battista Viotti as well as Rodolphe Kreutzer. He also made impressions by performing the classics of these stars and improved on them.

Niccolo Paganini developed his enigma as the years progressed and soon became a tale of legend that was near larger-than-life. Niccolo's dexterity in performing reflected his devoted approach to his calling. There was also a possible spin-off from his physical disabilities that showed in his long limbs. Niccolo Paganini's disabilities were acknowledged by experts to be of twin nature, and these were the Ehlers-Danlos syndrome and the Marfan syndrome. Both syndromes are associated with the connective tissues, and they affect the human musculoskeletal system. These lead to hypermobility of the joints, swelling, dislocations, and swellings.

The conditions were such that made it possible for Niccolo to extend his limbs to appear longer than the other at any time. This also made Niccolo go a bit over the top by putting up such stunts like severing the strings on his violin. He was also able to perform some classical tunes on a single string, and he did this with the Witches Dance. Niccolo Paganini was knighted in the year 1827 by Pope Leo XII as the Golden Spur.

Niccolo Paganini developed a circle of friends that was made of fellow composers such as Hector Berlioz and Gioachino Rossini. It was commonly reputed that it was Hector Berlioz that composed the tune, Harold en Italie for Niccolo. Paganini earned his place as one of the greatest violinists that have ever walked the face of the earth. He had 24 Caprices composed, and this was based on the use of the violin. This was brought to life while worked in the courts of Baciocchi. This particular tune has the reputation as one of the most intricate compositions ever made for the instrument.

Niccolo Paganini had some compositions that were made for specific concerts. The effect of Paganini led to the evolution techniques on the different use of the violin. He had a slew of trios, quartets, duo sonatas as well as solo pieces of numerous counts that suit the guitar. The difficult routine of playing three octaves on four strings of the violin using single hand spans was one that he mastered. This was one of his displays that were resounding for his time and era.

Niccolo Paganini displayed an uncommon grasp of the violin and this was made possible because he never stopped to work on his talent. Niccolo had rehearsals that extended for 15 hours on given days. Talking about influences on his tune, Niccolo Paganini paid obeisance to Auguste Frédéric Durand., who was an acclaimed violin virtuoso of Polish genealogy. Niccolo was able to synthesize many sounds and tunes without the hi-tech equipment found in our modern day world.Niccolo would imitate the sounds of farm animals with near precision. He brought this to light in tune, The Spanish Dance or “Fandango Spagnolo” in Italian.

“Duetto Amoroso” was one of his solo pieces and he braced the odds by depicting the moans and groans of lovers using the violin. Such was the height of Niccolo’s creativity that many continue to be held spell-bound when his music gets played.

Niccolo Paganini had his way with women, and he met Antonia Bianchi in the year 1813. The pair was on concerts together and toured the length and breadth of Italy as a duo. Their union ended in the Austrian City of Vienna in the year 1828 and in April. They never got married legally during their stay together. Their son was christened Achilles Cyrus Alexander.

Niccolo included Achilles on his tours to Europe and Achilles continued with the tradition after his father died.