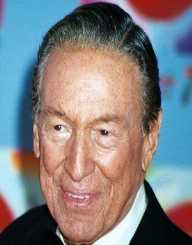 In February 1939, Wallace was a guest on a radio quiz show called, Information Please. He was still in university at the time. After he graduated, Wallace worked on-air for a short while at Interlochen Center for the Arts. His first job was as a radio newscaster and writer for WOOD Radio. He was with them for a short while, and in 1940 he went to WXYZ Radio as an announcer. From there, he became a freelancer for different radio stations in Chicago.

In 1943, Wallace joined the U.S. Navy. He served as a communications officer during World War II. Although he wasn’t involved in front-line combat, Wallace traveled extensively throughout the pacific to different countries and islands. He was discharged in 1946 and returned to Chicago.

For the next few years, Wallace did announcing for several radio shows in the Chicago area, and he also announced for the wrestling.

In 1949, Wallace moved into television. During the 1950s, he hosted several game shows, including, The Big Surprise, and Who Pays?

Wallace was very versatile with his television work. As well as the game shows, he did television commercials and hosted two late-night interview shows. The first was Night Beat from 1955 to 1957, and the second was The Mike Wallace Interview from 1957 to 1959.

In 1959, Wallace produced a five-part documentary in conjunction with Louis Lomax, on the Nation of Islam.

In the early 1960s, Wallace did commercials for cigarettes, under a contract he had with Philip Morris as a sponsor for his interview program. It was the main source of his income at that time.

He went back into broadcasting for a year from June 1961, hosting a nightly interview program for Westinghouse Broadcasting. At the same time, he also hosted the Biography series.

Wallace’s eldest son died in 1962, and Wallace made the decision to go back into news reporting. He started with a morning program on CBS, which ran from 1963 to 1966.

In 1968, Wallace was one of the reporters for 60 Minutes when it made its debut. He was sued on more than one occasion for comments made in different interviews, and other people he interviewed were very unhappy with him. Even so, Wallace remained with 60 Minutes until 2006, when he announced his retirement from the program.

Wallace continued as a Correspondent Emeritus with CBS for the next two years.

Wallace co-wrote two autobiographies. The first, Close Encounters, was released in 1984, and the second, Between You and Me: A Memoir, was published in 2005. Both were co-written by Gary Paul Gates.

In 1940, Wallace married Norma Kaphan. The couple had two sons, Peter and Chris, but they divorced in 1948.

Wallace married his second wife in 1949. Her name was Patrizia “Buff” Cobb. She was an actress. They hosted the “Mike and Buff Show” on television in the early 1950s, and then hosted “All Around Town” together. They divorced in 1955.

In 1955, Wallace married Lorraine Perigord. They divorced in 1986, and Wallace then got married for the fourth time that same year, to Mary Yates.

Unbeknownst to Wallace until his later years, he suffered from depression for most of his life.

When Wallace and CBS were being sued in 1984 for a documentary they had filmed and aired, Wallace was admitted to hospital with exhaustion. His wife at the time, Mary, made him go to a doctor, who gave Wallace a diagnosis of clinical depression.

Wallace was given medication and treatment, but he didn’t share the prognosis with anybody as he thought he would be seen as weak.

In 2008, Wallace underwent a triple-bypass operation. The pacemaker lasted well over the years, but in 2011, Wallace’s physical condition was reported to be declining.