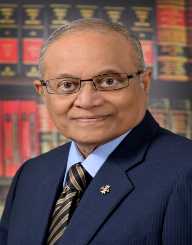 Maumoon Abdul Gayoom was a former President of Maldives, serving from 1978 to 2008.

Maumoon Abdul Gayoom was born on 29 December 29, 1937, in Malé, Maldives. His father Abdul Gayoom Ibrahim  (Maafaiygey Dhon Seedhi) was a Sheikh with eight wives, and his mother was Khadheeja Moosa. Maumoon is the eleventh child.

Maumoon Abdul was picked by Mohamed Amin Didi to form part of a group of fifteen students for education overseas.

Maumoon Abdul was ten-years-old in 1947 when he left for Egypt. When the Arab- Israeli war started in 1948, Maumoon was stuck in Ceylon, so he studied at the Buona Vista College in Galle and then the Royal College, Colombo.

After the war ended in 1949, Maumoon resumed the journey to Egypt, arriving in March 1950.

Maumoon Abdul was awarded the certificate by Gamal Abdel Nasser, the second President of Egypt. After that, he went on to study English from American University in Cairo, not before graduating with a Masters degree in Islamic Sharia.

Maumoon Abdul met Nasreena Ibrahim in 1965, who is also a Maldivian studying in Egypt. They married in 1969 in Cairo. Maumoon and Nasreena have four children together: twin girls Dhunya Maumoon and Yumna Maumoon, Ahmed Faris Maumoon and Ghassan.

Maumoon Abdul and wife moved to the University of Zaria in Nigeria, where he became a lecturer of Islamic studies at the Ahmadu Bello University. When the two-year contract ended, the family moved back to the Maldives.

Maumoon Abdul taught at the Aminiyya School in 1971, teaching English, Mathematics, and Islam.

In 1972, Maumoon Abdul worked as a manager of a governmental shipping department. Maumoon was tried and sentenced to four years jail for criticizing the policies of President Ibrahim Nasir in 1973, but he only served five months before granted amnesty after winning re-election.

Maumoon Abdul was then appointed to be an under-secretary in the department of telecommunications in 1974, and would later be promoted to its director.

Maumoon Abdul was imprisoned in China Garden prison for fifty days for the same offense in the same year. After his release, he worked as special undersecretary at the Prime Minister Ahmed Zaki’s Office.

In 1975, Ahmed Zaki was defeated in a bloodless coup, and the prime ministerial post was abolished. Maumoon was then made the Deputy Ambassador of the Maldives to Sri Lanka and was sent to the United Nations as a member of the Maldives delegation for two months.

In June 1978, the Citizen’s Majlis was asked to nominate a presidential candidate as Ibrahim Nasir’s second term was ending. Maumoon received votes for the second ballot and was elected as the third President of the Maldives.

Maumoon Abdul inauguration on 10th of November was held at Majeediyaa School. He was re-elected for six terms as the sole candidate by the Majlis before Maldivian voters changed the election system from the parliamentary system to direct election in 2007.

As the President of the Maldives is both the Head of Government and Head of State, Maumoon Abdul was the Commander-in-Chief of the Maldivian armed forces and the Maldives National Defence Force.

There were three attempts to overthrow him since the 1980s, where Maumoon Abdul had to request military help from India to topple the third attempt.

Maumoon Abdul became the honorary leader of the opposition party but announced his retirement from politics in 2010.

After a year, Maumoon Abdul is back in Maldivian politics, forming Progressive Party of Maldives (PPM) in September 2011. His half-brother Abdulla Yameen Abdul Gayoom is the sixth President of Maldives.