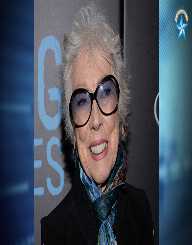 Margaret Keane is famed for the unique artwork she created. Unknown to the contemporary world, the artistic work of portraying faces with big eyes captured the hearts of many.

Margaret Keane was born on September 15, 1927, in Nashville Tennessee. Her original maiden name was Peggy Doris Hawkins. In 1929, she had an incident that changed her life forever. She lost her eardrum in a medical operation. Henceforth, she had to use her observation skills to understand her audience.

Keane studied art at Watkins Institute when she turned ten years. Her earliest paintings were displayed at her church. Funny looking angels with big eyes and drooping wings were dotted in the church displays.

In 1945, when she turned 18 years, she enrolled to study at the Traphagen School of Design. She stayed at the New York school for one year, departing from it in 1946.

Margaret Keane earnestly started her painting career in the early 1950s. Her initial painting was done on clothing apparel and baby cribs. Eventually, she graduated to doing larger portraits. It was here that she managed to capture the world with her unique style. Keane used both water and oil-based paints in her work.

Though she had a fulfilling talent, her exhibits went with the face of her second husband. Most of the exhibitions were credited to Walter Keane, her husband. Though Walter was a student of art from Paris, he did not major in painting. Thus unknown to many, he got all the credit instead of the wife.

Despite that, Margaret Keane had her paintings exhibited in various fairs. The kitsch paintings were popular to the audience. The amusement factor it had rather than the artistic content is what made it popular.

Some of the best known Hollywood actors have paid her to do their portraits. Notable names on the list are Joan Crawford and Natalie Wood.

Fed up with the abuse of her husband, Margaret Keane broke the truth in an interview with a media station in 1970. In the ensuing burden of proof, she dared Walter to a drawing competition to prove the real painter of the exhibited works. Walter never showed up. Keane eventually divorced and sued Walter in 1986.

In the Honolulu federal court, the jury subjected them to paint showdown. Keane proved her allegations by painting her portrait in less than an hour. Walter did not even attempt. The court eventually gave her USD 4 million in compensation. Four years later in 1990, a federal appellate judge overturned the compensation awarded to Keane. The appeal court, however, upheld the defamation verdict.

Though she lost the libel award of USD 4 million, Keane was satisfied that the truth was out. The world now knew who the real painter of the exhibited artwork was.

Margaret Keane got married and divorced two times. Her first marriage was to Frank Ulbrich. It lasted for six years, from 1948 to 1954. The couple had one child, Jane Ulbrich.

She then married the Paris based Walter Keane in 1955. They stayed together until the union ended in divorce in 1964.

Two years later in 1966, Keane got married to sports writer Daniel McGuire. The marriage lasted until 1983 when it ended with the death of McGuire. She currently lives in her home in Napa County in California.

Margaret Keane also featured in three films. The first one was The Mike Douglas Show in 1961. Her next movie was Entertainment Tonight which was produced in 1981. The last and most acclaimed one was done in 2014. The film which went by the title Big Eyes depicts her real life.

Margaret Keane suffered a life-changing accident in her childhood. But unlike most people, Keane took up the new condition with its challenges. She learned how to navigate her world through observation. Thus her mind became the first canvas of her portraits. She proved that inability is not a disability, and everyone is abled differently.

Her observation that little children usually have big eyes presented her with an opportunity to express herself. The acceptance of her angelic paintings in her church buoyed her confidence. This went to prove the famous Anglo-Saxon saying: when one door closes, another one opens.