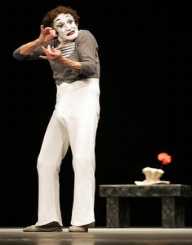 Actor and mime artist Marcel Mangel was born in Strasbourg, France on March 22, 1923. His father Charles and mother Ann were both Jewish. When the World War II struck France, the family fled to Limoges. Marcel was 16 years old at the time. In 1944, his father was captured by the Nazis and deported to Auschwitz concentration camp where he died.

Marcel Mangel and his brother took the surname Marceau during the War since it was a French name. The two brothers also joined the French Resistance in Limoges and later in the liberation of Paris. Marcel was fluent in English, French and German and started to work as a liaison officer for the army of General George Patton.

After the war ended, Marceau enrolled in Charles Dullin’s School of Dramatic Art in Paris. Since he was five years old, he wanted to become a mime, after his mother took him to a Charlie Chaplin movie.

One of his teachers at the Charles Dullin’s was Jean-Louis Barrault. Marcel Marceau joined his company and played the role of Arlequin in the pantomime Baptiste. His performance was so high that he was encouraged to perform in his own “mimodrama” Praxitele and the Golden Fish. The production was well acclaimed and established Marceau’s career as a mime.

In 1947, Marceau created his signature look Bip the Clown, with a striped pullover and a silk opera hat. He first performed at the Theatre de Poche in Paris. Marceau was acknowledged for his role in a pantomime and was seen as the most significant performer since Charlie Chaplin. His classic displays were The Cage, Walking Against the Win and In The Park. Marceau himself called his work the art of silence.

In 1949, Marceau received the Deburau Prize for his melodrama Death before Dawn. The same year he founded his Compagnie de Mime Marcel Marceau- world’s first and only pantomime company at the time. His group played in the most prominent theaters in Paris and later throughout the world. He produced 15 mimodramas altogether.

Marcel Marceau toured around the world with his performances. In 1955 and 1956 he visited the U.S., starting with his North American debut at the Stratford Festival of Canada. He then went to perform in New York and received rave reviews. His performances were sold out completely, and he needed to switch to larger theatres to accommodate the demand of the public. His last World tour continued from 2004 until 2006, where he covered United States, Europe, and Australia.

Marceau also appeared on TV as a star performer and later had his show Meet Marcel Marceau. He also starred in many motion pictures, such as Barbarella, Shanks and as himself in Mel Brooks’ Silent Movie. He has also published children’s and art books.

In 2000, his company moved to New York to present its show The Bowler Hat. In America, his career experienced a great comeback, and his performances were acclaimed.

Marcel Marceau was married three times. His first wife was Huguette Mallet, and they had two sons. His second wife was Ella Jaroszewicz, and the third - Anne Cisco, with whom he had two daughters. He also had a decade's long relationship with fellow mime Paulette Frankl.

Marcel Marceau died in 2007, at a racetrack in France. He was 84 years old at the time. He was buried in the Pere Lachaise Cemetery in Paris.