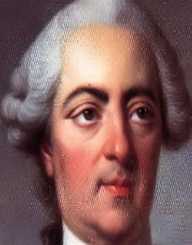 Louis XV was the longest reigning king of France, i.e., from 1715 to 1774. His reign as a king lasted for a total of 59 years and was mostly regarded for contributing to the decline of the royal authority that ultimately led to the French revolution in the year 1789.

His reign was the second longest reign in the history of France. Louis XV as a king directly succeeded his great-grandfather, i.e., Louis XIV when he was of the age of 5. During his reign, he got through two phases.

One when he was younger and was given a nickname ‘Louis le Bien-Aime’ meaning Louis the well-beloved which he loved. And, the second when during his reign he lost this name due to various reasons thereby earning the contempt of his subjects.

Louis XV was born on 15th of February in the year 1710 at one of the most famed palaces of Louis XIV who was also regarded as a Sun King in Versailles. He was named the Duke of Anjou when he was born.

Louis was not ultimately born to sit on the throne, but fate had other plans. Some family tragedies in a line changed the direction of Louis XV’s life. His grandfather passed away when he was still an infant and not so later; he lost his parents and his elder brother as well.

Louis XV was 5 when he became the king, but being too young, he could not take control of the empire. So, it was the Duke of Orleans who took control as his regent. The life for Louis XV was a privileged one; though lonely.

He was taught by Andre Hercule de Fleury who was the future Cardinal and had helped him develop his interest in science. Fleury had a significant impact on Loui XV’s life and was also the de facto head of France until his death in 1743. While being with Louis XV, he was also the first minister after the death of Louis’s uncle in 1723.

Though Louis XV was betrothed to the daughter of his uncle, he married Marie Leszczynska in 17. She was the daughter of the dethroned king of Poland. The king and the queen had ten children together out of which only seven lived to their adulthood.

The reign for Louis XV was full of ups and downs where at times he earned the admiration of his people during the war of Austrian Succession, as he took to battlefield personally, but it was the same war that made him lose the affection of the people very quickly.

The war not only proved costly for France but the treaty which was signed at the end was not able to settle disputes with Britain concerning certain colonies.

This continuous tension with Britain forced him to take sides with the earlier enemy Austria to fight in the famous Seven Year War which began in the year 1756. This did not go well as France not only lost the war but also had to part with its holdings abroad. This further pushed the country to exceed debts and deteriorating health for the country as a whole.

During the war, King Louis even survived an assassination attempt which was made by one of the supporters who stabbed him in his side in the French Parliament.

After the loss at war, some attempts were made to bring back the previous glory which proved to be too little and too late. This showed again that King Louis XV lacked the leadership skills and the tact to push through tough times. He ultimately died on 10th of May in the year 1774 in his bedroom where he was comforted by his mistress, Jeanne Becu who also took care of him in his last days.

His reign was followed by his grandson who faced the wrath of the French Revolution whose seeds had already been planted during King Louis XV’s reign.