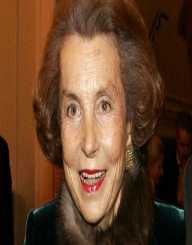 Also Known For : Owner Of L'Oréal

Liliane Bettencourt is a French heiress and businesswoman who is the principal shareholder in the cosmetics company, L’Oréal and is reputed to be the wealthiest woman in history.

Bettencourt was born on 21 October 1922 in Paris, France. Her parents were Eugene Schueller and Louise Madeleine Berthe. Her mother died when Bettencourt was just five years old. Her father would later marry Bettencourt’s governess. Her father was the founder of the L’Oréal company, which he started in 1909 selling synthetic hair dyes to Parisian hairdressers. Bettencourt began working for her father’s company at the age of fifteen. She worked as an apprentice and mixed cosmetics and labeled shampoo bottles. By this time L’Oréal was already an international brand, it was available in seventeen countries. Her father was highly supportive of the anti-communist group La Cagoule and backed them financially. The group supported collaboration with the Nazi’s during World War II. After the Second World War, Schueller hired a number of their ranks to work for his company. As her father’s only child and heir apparent she rose the ranks within the company.

Bettencourt rose to the position of deputy chairman of L’Oréal in 1950. EugéneSchueller died in 1957 and Bettencourt inherited his fortune and became the principal shareholder at L’Oréal. Bettencourt took the company public in 1963. In 1972, fearing the election of Francois Mitterrand and the implementation of the Common Programme, which aimed to nationalize key French industries, Bettencourt traded half her shares in L’Oréal for a three percent stake in Néstle.

In 1973, the company bought Synthélabo as it expanded into the pharmaceutical field. L’Oréal then bought the cosmetic company, Body Shop, in 2006 in a deal more than half a billion dollars. The company today operates worldwide with factories and laboratories across the globe, and it employs over seventy thousand people. Bettencourt stepped down from the Board of Directors of the company in 2012; she had taken the position in 1995.

The French government awarded Bettencourt the Legion of Honour. Bettencourt has an estimated worth of forty billion dollars making her the seventh richest person in the world according to Forbes. She is also the richest woman on the Forbes’ rich list.

In 1987 along with her family Bettencourt founded the Bettencourt Schueller Foundation which received a one hundred and fifty million dollar fund.