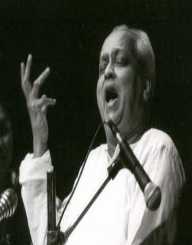 Shivaputra Siddaramayya Komkalimath was born 8th April 1924, in Sulebhavi, Karnataka, India. Gandharva’s father recognized his musical talent from a very early age. He was performing on stage by the age of 10, and at age 11, began to study music under B. R. Deodhar, a very well-known professor of Indian classical music.

In Hindu mythology, “Gandharva” is a musical spirit. His name became Kumar Gandharva at an early age in recognition of his great talent.

By the time he had turned 20, Gandharva’s talent of technique and his musical knowledge, saw him teaching at the school. In his early 20s, he was already recognized as a star. Whilst in his 20s, around 1947, Kumar Gandharva contracted tuberculosis. He battled the illness for six years and was left with only one lung functioning. During this period he wasn’t allowed to sing. He began performing again in 1953.

Kumar Gandharva explored different genres of music, including devotional songs and folk songs. He mixed his ragas up with different tempos in the same raga. With his creative style, new ragas were formed on the basis of the older ragas. Gandharva’s close friend and tabla accompanist, Vasant Acharekar, managed his musical career for quite some time. Acharekar had also been an assistant to Vasant Desai, but he decided to concentrate on Gandharva and his work with classical music and continued with his work until he died.

Kumar Gandharva wrote many concert programs, with his ragas and folk songs flowing in a logical order, and quite often with a common theme. His last public performance was in 1991.

1990:   Awarded the Padma Vibhushan, the second highest civilian award in the Republic of India

Kumar Gandharva married Bhanumati Kans in April 1947. She was also a teacher at Deodhar’s school. It was soon after his marriage that Kumar Gandharva contracted tuberculosis. The couple moved to Dewas, on the doctor’s recommendation of a warmer climate to help with Gandharva’s illness.

The couple had their first child in approximately 1955. In 1961, Bhanumati died during the birth of their second child.

After Bhanumati’s death, Kumar Gandharva married Vasundhara Shrikhande. She had been a fellow-student at Deodhar’s school. They had a daughter together, who also grew up to be a musician. Gandharva and Shrikhande performed together, and she would quite often provide backup vocals to his singing.

A movie was made on the life of Gandharva by Shabnam Virmani in the Kabir Project. The Films Division of the Government of India also created a documentary about Kumar Gandharva, comprised of interviews with people who knew him.

There is also a book that has been made from collected notes that were accumulated during a two-day workshop, called, Mukkam Vashi.