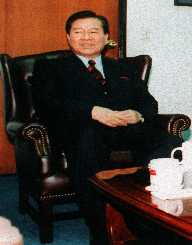 Kim Dae Jung was a Korean politician who was president of South Korea and won the Nobel Peace Prize in 2000.

Kim Dae Jung was born in Sinan (modern-day Jeollanam-do) on 6 January 1924. Korea at this time was under Japanese control. Kim and his family moved to Mokpo, and he was educated in the Mokpo Commercial High School. Upon graduation, he began working for a Japanese shipping company and eventually took over the business.

The Japanese were expelled from Korea at the end of World War II and Korea was partitioned into the communist North and capitalist South. In 1950 the North invaded the South in an attempt to reunify the country. The North overran most of the country before being driven back by U.N forces. Kim managed to avoid capture by the North during the early communist advances during the war. After the 1953 ceasefire was agreed Kim became involved in politics.

Kim Dae Jung tried unsuccessfully to get elected to the National Assembly before gaining a seat in 1961. However, a military coup in 1961 voided the elections. Park Chung-hee ruled South Korea as a dictator until his death in 1979. Kim ran for election in 1963 and 1967 and won using a pro-democracy platform.

In 1971,Kim Dae Jung stood against the Park regime in the presidential elections. Kim’s opposition to the Park regime and popularity, so him kidnapped by Korean Central Intelligence Agency and was only saved by intercession by the American ambassador. However, Kim was jailed in 1976, although it was commuted to house arrest after 1978.

A year later Kim enjoyed a brief return to freedom when Park was assassinated. In 1980, he was sentenced to death by the new dictatorship led by Chun Dwoo-hun. Pope John Paul II petitioned for clemency and Kim instead received a jail sentence and was later exiled to the U.S.A. While in America, Kim lectured on international affairs in Harvard University.

Kim Dae Jung remained highly critical of the South Korean government and spoke and wrote extensively in the western media. In 1985, he returned to South Korea and was placed under house arrest. Kim took part in the first democratic presidential elections in South Korean history in 1987. He came finished behind the ruling regime’s candidate Roh Tae-woo. The opposition vote was split as two candidates ran against the Dwoo-hun regime.

Kim Dae Jung was defeated in the 1992 presidential election and went to U.K to work at Cambridge University. In 1995, he returned to South Korea and launched his fourth presidential election campaign. Kim won the election and became the President of South Korea in 1998. Kim came to power in the wake of the Asian Recession. In 1999, following Kim’s reforms, the economy grew by ten percent. Kim ended the cronyism of previous presidencies and ended subsidies for the bloated and inefficient corporations. Kim’s policies on North Korea were mired in controversy.

Kim Dae Jung was the first president to meet with his Northern counterpart and begin a dialogue between the two nations. However, it was alleged that the North Koreans received millions of dollars in aid and the return of North Korean spies in return for the talks. Kim’s policies with the North Koreans are termed the Sunshine Policy. Kim who had been sentenced to death by previous regimes pardoned past presidents for their crimes in a reconciliation effort. Kim created the modern welfare state in South Korea and was also president as the country hosted the 2002 FIFA World Cup with Japan.

Kim Dae Jung has been married twice. He married his first wife, Cha Yong-ae, in 1945. They had three children together, Kim So-hee, Kim Hong-il, and Kim Hong-up. The marriage lasted until Yong-ae died in 1959. Kim married his second wife, Lee Hui-ho, in 1962 and they had a son, Kin Hong-gul, together. Kim remained with his second wife until his death in 2009. Kim died of multiple organ failures on 18 August 2009. He was given a state funeral, and a North Korean delegation attended.

Kim Dae Jung was a Roman Catholic. He claimed he witnessed Jesus when the Park regime kidnaped him. The Pope had appealed for the commuting of his death sentence in 1980. He was buried according to Catholic traditions.