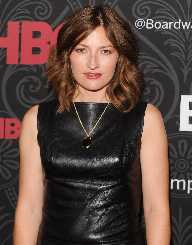 Kelly Macdonald is an eminent and award-winning film actress. She has made television appearances in films such as in ‘Boardwalk Empire’ and ‘Gosford Park,' and is distinguished for her roles ‘Trainspotting’ and ‘Harry Potter and the Deathly Hallows Part 2’. Remarkably, she has voiced ‘Merida’ a Disney/ Pixar film heroine, in the animated film ‘Brave.' Notably, she has earned herself awards such as the BAFTA Award for Best Actress and nominations such as the Golden Globe Awards for her outstanding performance in a miniseries/ Television film.

Kelly Macdonald was born in Glasgow, on February 23, 1976. She received a middle-class upbringing until her parents divorced when she was nine years old. After the divorce, she and her brother stayed with their mother, who worked in a garment industry as the sales executive. Her mother strived to take care of them while their father was mostly apart from them.

Macdonald’s career began when she was working at a bar in Glasgow. She saw an advertisement of an open casting session for ‘Trainspotting’ in a leaflet and decided to audition. During the audition, she edged other women although she had no professional training. Moreover, she won Diane’s role, a seductress to Ewan McGregor’s in the Danny Boyle’s, 'Trainspotting,' 1996 movie.

During the same year, she starred in ‘Stella Does Tricks’ where she played as a young prostitute. Her act opened doors to several support roles in films such as 'Elizabeth' of 1998 and 'My Life so Far' of 1999. Other roles include her play as, Mary O’Neary in ‘Two Family House’ film and her role in ‘Finding Neverland.' She made a remarkable performance in Robert Altman’s ‘Gosford Park’ where she portrayed a young maid to an aristocrat Maggie Smith.

In 2003, she played ‘Intermission’ as Deirdre and took a significant role in BBC’s drama, ‘The State of Play’ by Paul Abbott which she co-starred with John Simm and Bill Nighy. In this play, she portrayed a young reporter caught up in a political mystery.

Later on, in 2005, Kelly reunited with Bill Nighy in play ‘Girl in the Café’ which led to her nomination for the Golden Globe Award for Best Actress- Miniseries or Television Film in 2006 and a Primetime Award for Outstanding Supporting Actress in a Miniseries/ Movie. In the same year, she starred ‘Nanny McPhee’ film as maid Evangeline.

In 2006, Macdonald played support roles in ‘A Cock and Bull Story’ followed by an outstanding performance in 2007 with her role in ‘No Country for Old Men.' Her rare talent earned her a nomination for BAFTA Award for Best Actress in a Supporting Role.

This remarkable performance opened doors for other support roles such as ‘Choke’ in 2008, ‘In the Electric Mist’ and ‘Skellig’ in 2009. During the same period, she also played the lead role as Kate Frazier in ‘The Merry Gentleman’ of 2008.

In 2010, Kelly played a British Romantic comedy film; ‘The Decoy Bride’ that released in 2012. She also played a drama series ‘Boardwalk Empire’ debuted in 2010, where she plays ‘Nucky’s’ love interests. This show earned her success and a nomination for an Emmy Award. Later in 2011, she replaced Nina Young in Harry Potter film ‘Harry Potter and the Deathly Hallows-Part 2.’

In 2012, Kelly voiced Merida, the lead heroine of the Disney/Pixar animated film ‘Brave,' and starred in ‘Anna Karenina’ as Dolly. From 2010-2014, she starred in the HBO, five seasons, drama series ‘Boardwalk Empire' where she played, Margaret Thomson, the wife of crime boss Nucky Thompson. Alongside other cast members, they received the Screen Actors Guild Award for Outstanding Performance by an Ensemble in a Drama Series.

Additionally, in 2016, she played in an episode ‘Anthology Series Black Mirror’ of the ‘Hated in the Nation.' She also starred in ‘Special Correspondents’ and ‘Swallows and Amazons.' In the same year, she reiterated her role as Diane in Danny Boyle’s T2 'Trainspotting.'

Macdonald married, Dougie Payne, bassist of the Travis rock band, in August 2003. The couple has two children the first son named after the late Freddie Mercury of the Queen band. Additionally, the couple moved to Glasgow in 2014 after their stay in London and New York City.

In 1997, she received a nomination for Best Film Actress for a BAFTA Scotland Awards in 'Trainspotting.' Later in 2000, she was nominated as the Best Female lead for Independent Spirit Awards and the Best Acting Ensemble for the Phoenix Film Critics Society. In the same year, she received a Satellite Awards for Best Cast Motion Picture and was selected as the Best Cast by the Online Film Critics Society in the ‘Two Family House’ film.

Gleefully, in 2002, she received a Screen Actors Guild Awards for her outstanding performance in a motion picture and Florida Film Critics Circle as the Best Ensemble Cast. She also won nominations for the 'Critics’ Choice Movie Awards and Empire Awards.