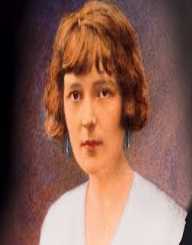 Katherine Mansfield was born as Kathleen Mansfield Murry on October 14, 1888, in New Zealand. She grew up in a wealthy family in Wellington. Her father Sir Harold Beauchamp was a prominent banker and later headed the Bank of New Zealand. She had four other siblings in the family.

She went to Wellington Girls High School. She started writing articles for her journalism club. She also wrote for the school magazine The High School Reporter. She saw the marginalization of the Maori tribes by the New Zealand administration. The Maori are a collection of Aboriginal tribes from the Oceania regions. Deeply troubled, Mansfield started writing the stories on her childhood. She depicted her love for the Maori positively.

In 1903 she traveled and settled in London England with her family. Katherine Mansfield enrolled at the Queen’s College. She continued her journalistic trends writing for a local daily. She also toured continental Europe while a student. She graduated in 1906 and returned to New Zealand.

On her return, Katherine Mansfield wrote short stories for a local daily called Native Companion. She was hired and became a professional writer. In 1908 she went back to London. She became pregnant in Germany and delivered a girl. Mansfield took a break from writing to nurse her child. In 1911 she compiled her motherhood experiences in the book titled In a German Pension.

Encouraged by the French ideology of Fauvism, she did a short story titled The Woman at the Store. The story was published on the English magazine Rhythm. In 1914, she moved with her new family to France. Mansfield wrote the story Something Childish but Very Natural in the later months of 1914. Unfortunately, the book was published posthumously. She was declared bankrupt by a London court in 1914.

While in France, Katherine Mansfield produced some of her best works. In 1916, she published a series of stories including Prelude, Mr. Reginald Peacock’s Day, and A Dill Pickle. The following year, she wrote the Man without a Temperament. Mansfield started suffering ill health in 1917. She was diagnosed with tuberculosis. In 1920 she wrote and published An Indiscreet Journey. In this publication, Mansfield narrated the love affair she had with Frenchman Francis Carco. Mansfield strained from her relationship and eventually separated from her husband.

Mansfield embarked on compiling her work after the collapse of her marriage. She published her collected work like Bliss, The Garden Party and Other stories, Mr. And Mrs. Dove, and The Stranger. She wrote many stories which were published after her demise.

Katherine Mansfield initially wrote her stories in conformity with the traditional literary norms of the English society. She gradually started drifting under the influence of Fauvism, when her brother died in 1917, Mansfield became a free spirit. She freely discussed her independent mind regarding the topics she wrote. She surprised many with her style which was alien to the English speaking world.

Katherine Mansfield lived a free-spirited life. She had several affairs with multiple men. She got married and separated from her husband. On the list of the men are Englishman Garnet Trowel, Polish man Floryan, and her husband, George Bowden.

She was mentioned in the grapevine to be a lesbian. She became associated with two women, the Maori native Maata Mahupaku and Caucasian Edith Kathleen.

Katherine Mansfield succumbed to ill health on January 9, 1923. She died of pulmonary complications caused by long term tuberculosis in Fontainebleau in France.

She has a park named after her. Her birthplace and the house she grew in were named Katherine Mansfield House. In France, a street in Menton bears her name.

Several films have been done on her life. In 1973, the television film A Picture of Katherine Mansfield was produced. In 1985, the film Leave All Fair was released. In recent years, the film Bliss was produced in 2011.

Theater directors have adapted most of her stories into stage plays in New Zealand and Britain. Some writers have written novels serializing her life like Mansfield, A Novel. This was written by C. K. Stead in 2004

Katherine Mansfield was a compassionate supporter of the right of the indigenous natives of New Zealand. She wrote positively in her stories and other public interviews she gave. She has been honored by most of the Maori established schools in New Zealand.